All Roshini Muniam wanted was to compete on Facebook for a chance to fly into space. Here's what she got instead.

All Roshini Muniam Rose wanted was to compete on Facebook for a chance to fly into space. What she got instead were sexist and obscene comments trying to keep her down.

The comments were posted on Roshini’s photo on the Facebook page for AXE Malaysia’s Apollo Space Academy.

“Women should be rejected… it is only for males… if your tampon burst while you are in space, the entire spacecraft will be spoilt… kah kah kah,” added another. 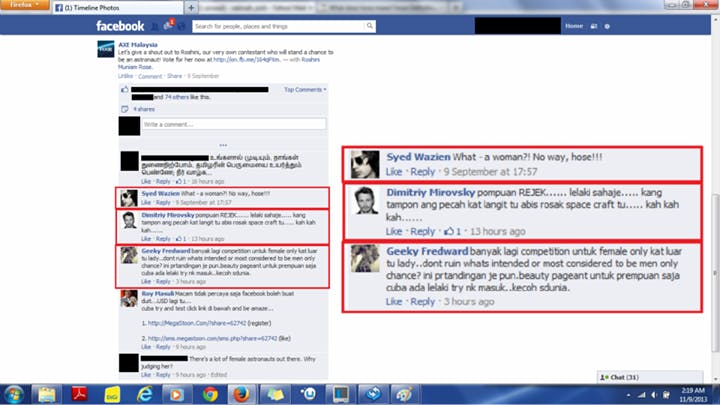 Roshini, 27, hasn’t let the trolls dampen her spirits. Not only have dozens of people come to her defense, the University of Malaya student has also fired back.

“Sticks and stones may break my bones, but words will never hurt me,” she commented. “I am all out to win this competition because I want to inspire ordinary people to have extraordinary dreams & goals.” 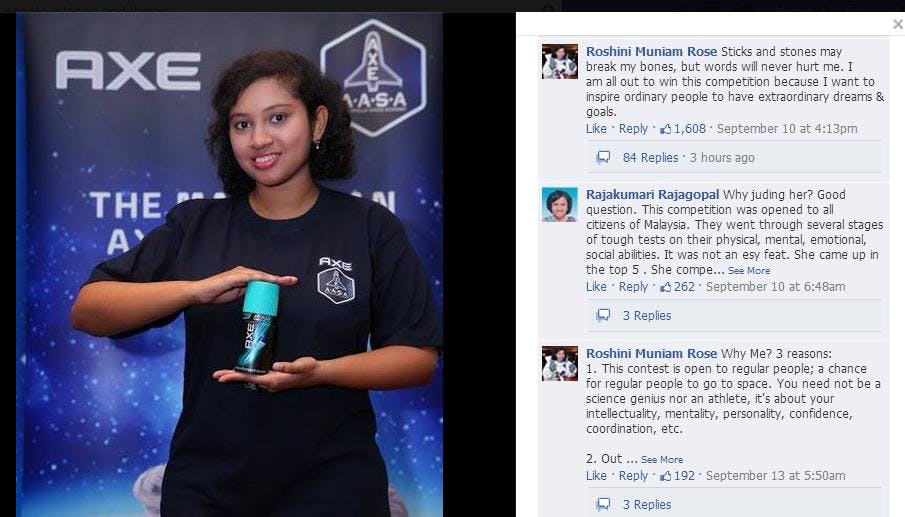 Roshini is one of five finalists in Malaysia fighting for the chance to represent his or her country in Florida, where they will compete for a chance to travel into space. It’s unclear how the winner will make such a trip but chances are it will aboard something like the Lynx spacecraft, a suborbital spaceship. This was the ship used earlier this year when AXE ran a similar promotion.

The winner of this latest competition will be announced Tuesday. And so far, Rose is sitting in first place.

“Women have been making headway in science and engineering for ages and ages and the only reason some of you don’t know about it is because you are too ignorant and too lazy to do something about your ignorance,” Anura Bird commented. “Best of luck Roshini.”