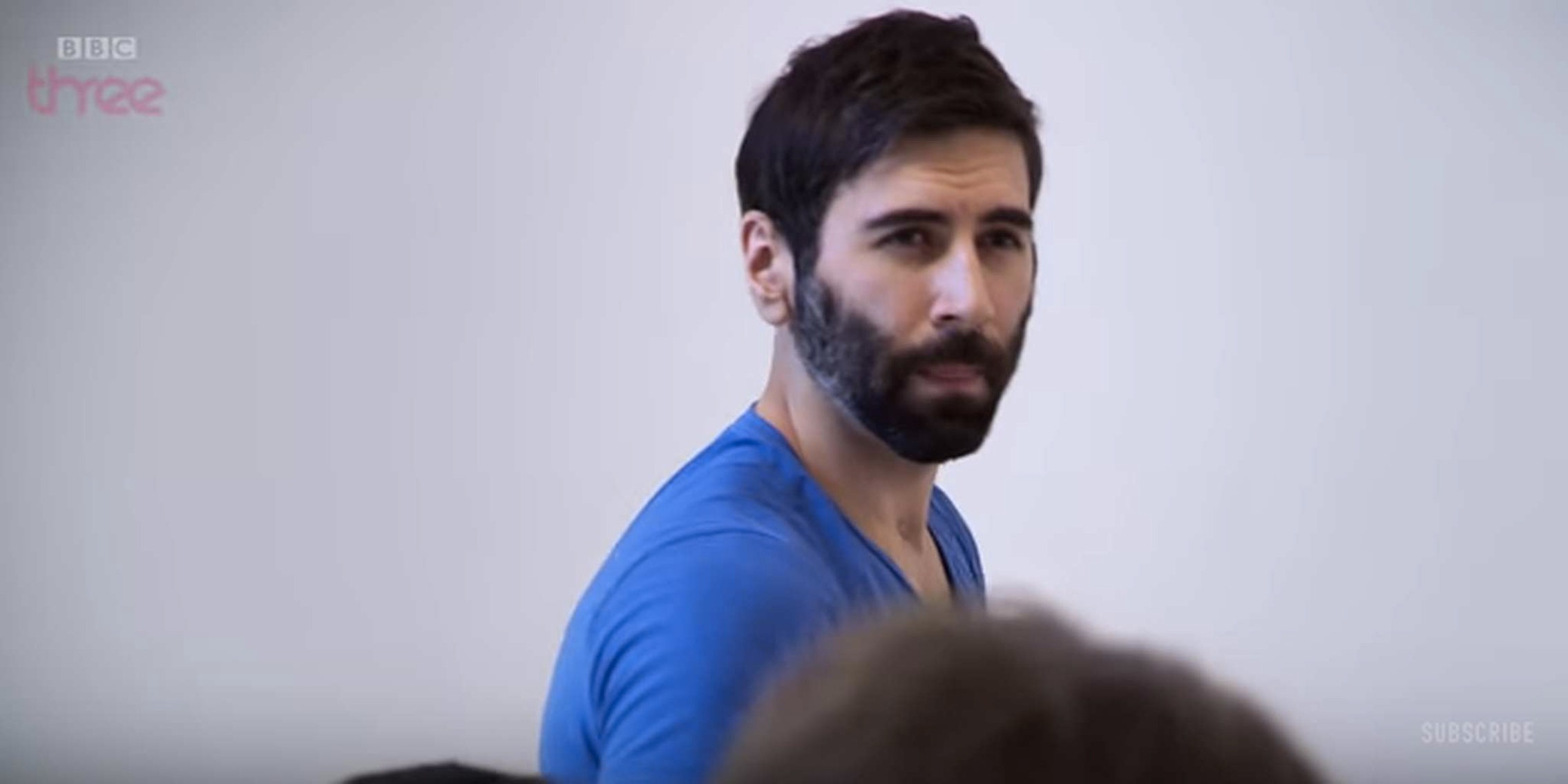 'I wanted to make it abundantly clear that we will not permit a threat to our safety.'

This week saw a hasty organization effort in response plans by Roosh, a men’s rights blogger, to bring men together in cities around the globe for anti-women meetups. After a few days of increasingly mounting pressure, Roosh (real name: Daryush Valizadeh) announced on his blog that the meetups would be cancelled.

Roosh is the men’s rights activist (MRA) behind the blog Return Of Kings, which regularly covers topics like the perceived feminization of men and decline of traditional masculinity. He regularly espouses beliefs similar to ones voices in this Feb. 2015 post called “How to stop rape.” Roosh now calls that post “a satirical thought experiment,” but in it he wrote:

“Let’s make rape legal. Less women will be raped because they won’t voluntarily drug themselves with booze and follow a strange man into a bedroom, and less men will be unfairly jailed for what was anything but a maniacal alley rape.”

The meetups planned for Saturday, Feb. 6 (“International Meetup Day”) were intended to bring together his anti-feminist, pickup artist [PUA] followers for so-called “tribal meetings.” Over 100 meetups were scheduled for this Saturday in more than 40 countries, spanning the globe from Sydney to London to New York City. But when media outlets, politicians, activists, feminists, and allies caught wind of them, this groups banded together with petitions and calls to action to stage counter-protests and, when possible, prevent Roosh’s followers from meeting. The miraculous thing? It seems to have worked.

Participants were originally instructed to meet at 8pm at one of the locations listed on Return of Kings and identify fellow participants by asking “Do you know where I can find a pet shop?” It seemed all systems were a go for Roosh’s followers to “‘come out’ of the shadows and not have to hide behind a computer screen for fear of retaliation,” as he put it on his blog, Return of Kings. Then, on Wednesday, Roosh posted an update on the blog that read “MEETUP CANCELLED.” In it, he explained:

“I can no longer guarantee the safety or privacy of the men who want to attend on February 6, especially since most of the meetups can not be made private in time. While I can’t stop men who want to continue meeting in private groups, there will be no official Return Of Kings meetups.”

“I felt overwhelmingly that there was no place in the U.K. for this sort of terrorism against women.”

The reaction was surprising, as Roosh typically does not cow to “green-haired female activists or male feminists,” as he calls them: So, why this time? And is it possible that the events will still go on, but in different locations? (A blogger named Davis M.J. Aurini addresses the cancelation in a post published today on Return of Kings.)

The Daily Dot spoke to three people in different corners of the world who were heavily involved with getting local citizens and government to thwart International Meetup Day to see how they felt about the cancelation and discover what role feminist activism really played.

“I remain deeply concerned that despite the events being officially canceled, they will go ahead on an unofficial basis,” Katie Pruszynski, the woman behind the U.K. Change.org petition to stop Roosh events, told the Daily Dot via email. She wrote that she is in touch with members of Parliament and is encouraging them to provide a police presence in the areas where the meetups were scheduled to take place.

Pruszynski is a political communication consultant in Sheffield, England, and first became aware of Roosh and his teachings shortly after another pickup artist, Julien Blanc, was denied entry to the U.K., seemingly in part thanks to a Change.org petition that garnered 150,000 signatures. That prior success motivated Pruszynski to start a petition of her own when she heard about International Meetup Day. “I felt overwhelmingly that there was no place in the U.K. for this sort of terrorism against women,” she told the Daily Dot. “And that is the appropriate word; but I wanted to make it abundantly clear that we will not permit a threat to our safety from the rage of some men’s inadequacy.”

Pruszynski’s Change.org petition about Roosh’s meetups received more than 87,000 signatures. To her, it was a show of strength by feminists and their online communities eager to take a stand against men who deny the existence of rape culture.

“They [feminist activists] face some of the most virulent and vicious abuse online for taking a stand in defense of women, but they continue to fight this cause,” Pruszynski told the Daily Dot. She continued:

“I know they will continue to shine the brightest light onto these crucial issues. And although I can’t tell you if they provided more signatures on the petition than anyone else, I do know that without them, we would know much much less about the dangers faced by women every day.”

“I really wanted to confront these people face-to-face.”

Kirby Casterline, one of the organizers of the counter-demonstration scheduled during Roosh’s meetup in New York City’s Washington Square Park, is still continuing with the event despite the meetup cancelation. Casterline (who prefers the pronouns they/them) admits that the counter-protest may be a bit anticlimactic, but believes it is still valuable for concerned citizens to organize, anyway.

“I mean, [Roosh and his followers] were clearly scared of us, which is good. But for myself, I was a little disappointed. I really wanted to confront these people face-to-face,” they told the Daily Dot in an interview via Facebook messenger. “With all this passion and willingness for autonomous action showed on the [Facebook] event page, I really wanted to see the look on the [Return of King readers’] faces when it was all directed at them in person.”

Casterline had heard stories from other countries about anti-fascist groups intercepting meetups of MRAs and they felt inspired to do the same. “I figured if they thought they’d be free to do that in NYC, I’d do my part to make sure they were sadly mistaken,” they told the Daily Dot. Going forward with a counter-demonstration on Saturday will still be a strong statement against Roosh and rape culture, Casterline said, continuing:

In Australia, Blair Williams, a Ph.D. student at the Australian National University in Canberra, was also moved to take action. She, too, launched a Change.org petition, and 100,000 signatures later, she said she was blown away by the collective action to thwart International Meetup Day.

“I was absolutely outraged that his supporters were organizing an event that was likely to promote his pro-rape PUA techniques,” Williams wrote the Daily Dot in an email, continuing:

“As they were eventually going to be heading to a bar, I assumed that these techniques would be used on young women. … I created this petition to gain awareness and further promote the agenda that violence against women and misogyny is not acceptable in Australia!”

Williams is happy to take some of the credit for the Roosh’s ultimate decision to issue a cancelation. “I think that without my, and others, petitions then this would not have gotten as much widespread coverage, which meant that less people would have been disgusted at what Roosh V is promoting,” she wrote.

Feminist activists are not the only group who responded to the Feb. 6 meetups. The activist/hacker group Anonymous used its Facebook page earlier in the week to dox Roosh by providing the address and phone number of Roosh’s mother’s home in Silver Spring, Maryland, where he lives. He even called the police, and according to his Twitter, has been told to leave the D.C. area.

There’s some speculation amongst activists that all International Meetup Day events have not truly been canceled, with some wondering whether the locations of meetups will just be secretly moved. According to the Facebook page of a counter-demonstration that was supposed to happen in Brisbane, Roosh’s followers have simply changed their plans for organizing. Meanwhile, the Washington Post alleged that it was all just a publicity stunt for the cause, despite Roosh’s assurance that it was very much a real thing.

“Clearly the cruel irony of the situation was lost on Roosh himself, as he explained that the reason for the cancelation was that he no longer felt safe attending them, nor could he guarantee the safety of his members,” Pruszynskim the UK organizer, pointed out. “Perhaps he’d like to hear from women who know that feeling all too well.”