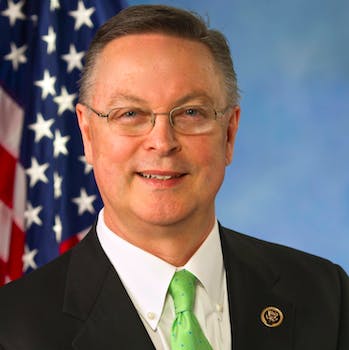 She had a poetic response to Rep. Rod Blum (R-Iowa), and his disdain for Obamacare.

While Rep. Rod Blum (R-Iowa) took a moment to discuss everything he’d like to change about Obamacare, one particular comment was met with cheering.

“Get rid of some of these crazy regulations that Obamacare puts in,” Blum said at an Iowa town hall meeting last week. “Such as a 62-year-old male having to have pregnancy insurance.”

The crowd was loud, but a quiet woman in it waited to respond. Barbara Rank, a retired special education teacher, sent her response to her local newspaper, the Telegraph Herald—and it’s since been all over the internet:

I ask, why should I pay for a bridge I don’t cross, a sidewalk I don’t walk on, a library book I don’t read?

Why should I pay for a flower I won’t smell, a park I don’t visit, or art I can’t appreciate? Why should I pay the salaries of politicians I didn’t vote for, a tax cut that doesn’t affect me, or a loophole I can’t take advantage of?

It’s called democracy, a civil society, the greater good. That’s what we pay for.

She learned her response went viral after her daughter saw her clip on Reddit days later. The sidewalks in her response come from an instance she remembered when people didn’t want to pay for a sidewalk near her hometown. The flowers were included because she realized that she is still discovering the area after coming across a gardened boulevard.

The idea about a civil society is a concept she dates back to her childhood social studies classes, she told the Washington Post on Monday.