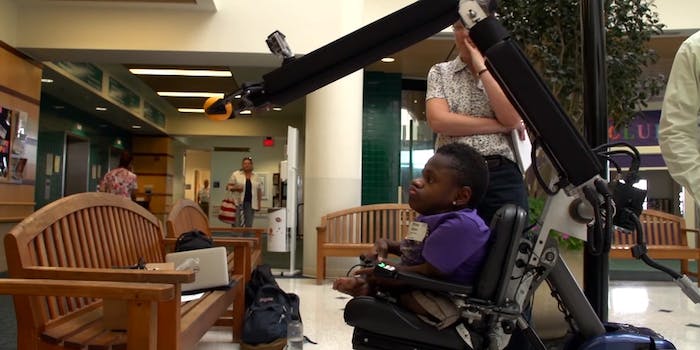 Thanks to three bioengineering students, Dee Faught's reaching for all new heights.

Dee Faught lives with osteogenesis imperfecta, a rare genetic condition characterized by bones that fracture easily, spinal curvature, and respiratory problems. Despite being bound to motorized chair that makes it difficult to complete ordinary tasks, thanks to three bioengineering students, he’s reaching for all new heights.

What started as a school project at Rice University turned into a two-year endeavor to build a motorized arm that connects to Faught’s chair and, via a video game controller, allows him to pick up and grab objects.

It’s an incredible feat, one that members of Team Brittle Bones (Matthew Nojoomi, Sergio Gonzalez, and Nimish Mittal) accomplished significantly under budget. The robotic arm cost only $800 (most comparable commercial products cost around $25,000), and the three juniors are now applying for grants to further develop the project, according to Rice University.

“We’ve seen a lot of people tell him he’s not going to be able to do certain things,” Faught’s father told Rice University. “Dee’s not one to say, ‘I can’t do it.’ He’ll figure out a way.”

“It will help me be more independent,” Faught said

This four-minute documentary, which captures Faught trying out the arm for the first time, is more inspiring and uplifting than any college promotional video or highlight reel you’ll see this football season.