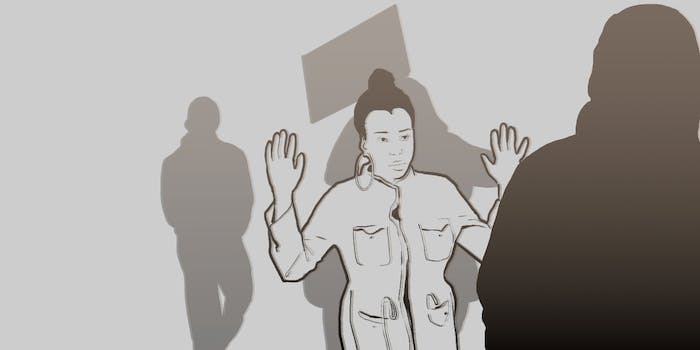 Protesters gathered for three days of rallies and marches in New York.

Thousands participated in a Manhattan march against police brutality on Saturday, and several were arrested.

The march culminated in three days of protest called #RiseUpOctober. The event began on Thursday with a rally and march, then continued Friday as protesters demonstrated at Rikers Island. Organized by Carl Dix, a founder of the Stop Mass Incarceration Network, and Cornel West, an author and activist, #RiseUpOctober continued the call for police accountability that has sparked nationwide protests over the past year. West also asked participants to donate to an Indiegogo campaign that would fund travel expenses for protesters and the families of those killed by police. As of this writing, the campaign has raised over $92,000.

At Thursday’s rally, family members called on protesters to remember their relatives who died during police encounters. They were joined by director and screenwriter Quentin Tarantino, who called attention to the death of Freddie Gray in Baltimore earlier this year.

Friday’s protest at Rikers Island aimed to draw attention to the treatment of inmates at the prison and ended with several arrests.

Protesters were also arrested during Saturday’s march through Manhattan.

The weekend protests come as President Obama is scheduled to meet with police chiefs from across the nation to discuss criminal justice reform. Obama spoke before a gathering of police representatives on Oct. 22 and addressed the Black Lives Matter movement, saying, “I think the reason that the organizers use the phrase ‘Black Lives Matter’ was not because they were suggesting nobody else’s lives matter. Rather, they were suggesting that there is a specific problem that is happening in the African-American community that is not happening in other communities.”

The president is set to meet with the International Association of Chiefs of Police next week in Chicago.