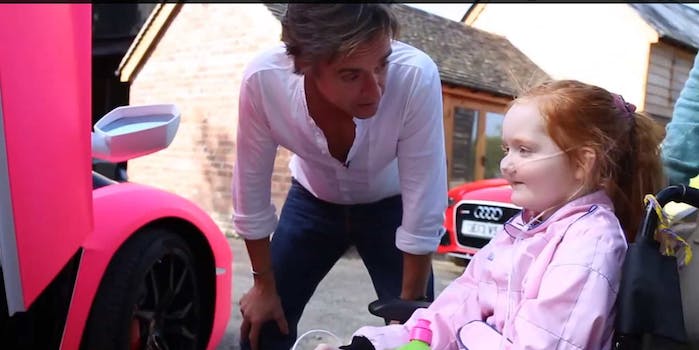 A seriously ill girl had one wish, and this celebrity hopped in his private helicopter to grant it

Why this pink Lamborghini was airlifted to a seriously ill girl in England.

Give Emilia Palmer credit for dreaming big. The 8-year-old from Kimbolton, England suffers from a serious lung condition, and lives much of her life confined to a wheelchair, always dependent on others to get anywhere. So when the folks at the Birmingham Children’s Hospital were kind enough to ask her for her one wish, she had one simple response: A ride in a pavement-peeling pink Lamborghini.

Within a few days, a helicopter was hurtling through the skies over the English countryside, with a specially-painted, pink Lamborghini Aventador Roadster dangling beneath it. Emilia’s wish had gone straight to U.K. charity Ray of Sunshine, which immediately set about making it come true.

And there was a second surprise arriving in a second helicopter: Richard Hammond, host of the massively popular Top Gear, who would be her chauffeur on the best damn ride anyone’s ever had in a pink Lamborghini.