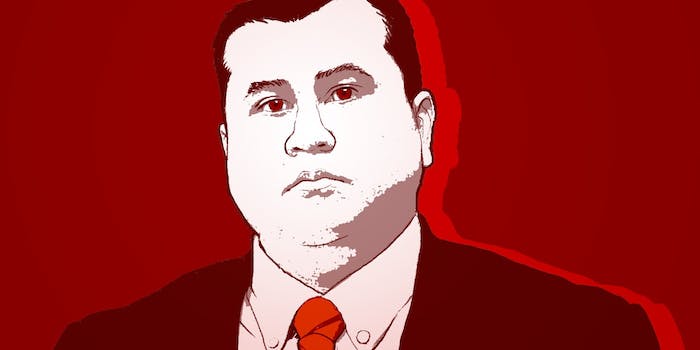 This is Heather's side.

Everyone has a romance that ended badly. Maybe a red flag popped up early and led you to walk out. Maybe it took a breakup to show you the monstrous side of a person you once trusted. The flutters of butterflies can hide a person’s ugliness at first, but eventually something snaps.

After his acquittal for the murder of teenager Trayvon Martin in 2012, Zimmerman has appeared in the news for allegedly committing a series of violent offenses, including multiple incidents of domestic violence. Both times he was arrested for domestic violence, the charges were dropped.

“It was a total nightmare.”

Online, the 32-year-old’s image has its own kind of blemishes—from the time he partnered with a “Muslim-free” gun store to sell Confederate flags to an October retweet of a photo of Trayvon Martin’s dead body that led to calls for Twitter to disable Zimmerman’s account.

In an exclusive interview with the Daily Dot, Heather, Zimmerman’s victim, tells her side of the story.

Heather is a 35-year-old living in Central Florida. She’s from Kentucky, and the southern twang is still unmistakable in her sweet, soft-spoken manner. She corresponded with the Daily Dot first via text messages on Thursday, and then on the phone Friday. She declined to give her last name, an understandable omission considering that most of the Internet has her contact information.

“I’ve never dreamed that anything like this would ever happen to me,” Heather says. “I’m from a very small town. I’ve never been in the public eye by any means.”

She was at her office on Thursday, working, when a text from a total stranger arrived. According to Heather, it was a screenshot of Zimmerman’s tweet, along with a kind message that read, “I just want you to know. I’m so sorry that this happened to you, I just didn’t know if you were aware.”

“And about that time my phone just starts going crazy,” Heather says. “There was a lot of positive stuff, people saying, ‘I’m so sorry.’ People asking for more nude pictures. There was comments like, ‘So, you date Muslims’—a lot of really explicit stuff, people calling me horrible names. It was a total nightmare.”

Having near-naked pictures of herself show up online was a complete shock, one that no one can be fully prepared for.

“He’s a very charismatic person when you first meet him. He tells you what you want to hear.”

“It’s horrible,” she says. “It’s very violating. You never think it will happen to you.”

Within 20 minutes of Zimmerman’s tweets—one included her phone number, the next exposed her email—Heather arrived at the local sheriff’s department to fill out paperwork for a restraining order. She’s never heard of “revenge porn”—the social phenomenon of people sharing once-private photos online for nefarious purposes. But she had heard of George Zimmerman.

When she first met him, she says, she was taken aback.

“He’s a very charismatic person when you first meet him. He tells you what you want to hear,” Heather says. “And you just think, well the media portrays him as this monster. You’re looking at him, and you’re listening to him, and it’s like, ‘They were so wrong.’ But did I think he would ever do this to me? No.”

Despite his charms, her parents were worried when they found out their daughter—who had previously been in a committed relationship for 14 years—was involved with a notorious public figure. They were aware of his alleged history of domestic violence and his tendency to make headlines for all the wrong reasons. Heather says that her mother’s worst fear was that she would be in the grocery checkout line and see her daughter on the front page of the newspaper.

“This was not the first time I’ve tried to break things off with him.”

On the phone, Heather doesn’t rely on textbook terms like “abuse” or “domestic violence” to describe her relationship with Zimmerman. But she felt an urgency to escape.

“This was not the first time I’ve tried to break things off with him,” says Heather. “It’s like different stages. At first, it’s like begging and pleading and then crying and then anger and just horrible, horrible things—like I’m dead to him, and vulgar, vulgar names.

“It sucks. I have left in the past, and he calls and texts every day until I’m sucked back in.”

Heather says she never saw him become physically violent. But in the light of his recent actions, she seems nervous about what might happen in the future. Though she was granted a restraining order on Friday, local authorities were still unable to serve Zimmerman by the time we spoke late that afternoon.

At least most of the phone calls and texts have stopped. Though her information and nude photos were briefly online, the only people harassing Heather now are reporters.

She suddenly hushes and says, “There’s press at my house.” A news crew has shown up on her next-door neighbor’s front lawn. Heather says she has no idea how they got there.

“I’ve been looking over my shoulder waiting for press to show up at my house or my work,” Heather says just moments before the news crew gets to her front windows. “It’s been a lot of just being careful of my surroundings.”

Zimmerman’s tweets about Heather weren’t just a violation of her privacy; they accused her of cheating on him “with a dirty Muslim,” as well as stealing his money and a gun. Heather says the accusations were all total inventions: She never cheated on him with anyone, Muslim or otherwise, and the gun was his birthday gift to her.

“I think he used the Muslim word as his platform for his racism, because it is such a hot topic right now,” she says, adding that Zimmerman frequently made overtly racist comments while they were together, though she’s not interested in going into detail.

In the days to come, Zimmerman’s victim has a lot to balance. Everyone has seen the dreaded content. That means walking into work keenly aware that her boss and co-workers know everything. It means talking things through with her parents, who she says are upset.

Heather says she can’t talk about anything beyond the restraining order, because elements of the case are “pending.” But as she plans to lay low and work quietly through the weekend—trying to avoid the reporters she says are bombarding her—there’s one small saving grace.

“With Twitter suspending his account, it kind of took away his lifeline and his platform,” Heather says. Though Zimmerman uses Facebook, she says those are private and for friends and family only. He can no longer harass her online.

Inevitably, all of this will eventually fade away, and Heather’s life should settle back into peaceful normalcy.

“Truthfully, I’m a pretty private person,” she says. “Do I regret sending those pictures? Yes. Do I wish I’d never done it? Yes.”