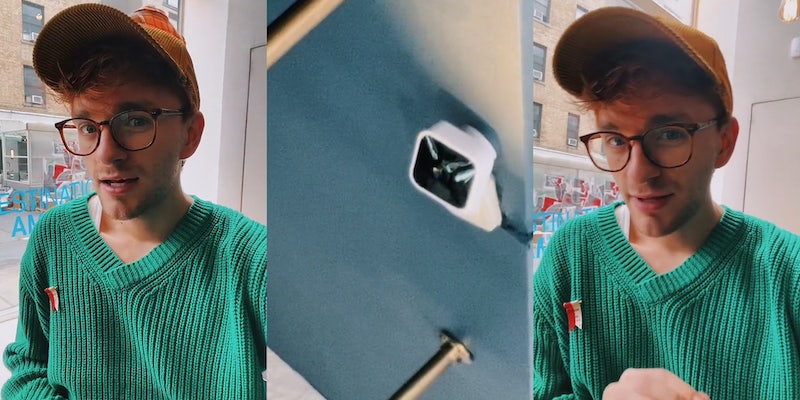 ‘This is not a f**king drill’: Retail worker claims employer installed cameras that record audio at work, against state law

In a viral video, TikToker Ethan Carlson (@therealethancarlson) revealed that his place of work, a retail store in New York City, installed new cameras that allow audio recording. The video has over 20,600 views.

“This is not a fucking drill,” he says in the clip. “My place of work has installed these cameras.”

Carlson pans to the new cameras and explains that they’re the Amazon cameras that are often used as baby or dog monitors. The Amazon Blink allows two-way communication, night vision, motion detectors, and cell phone alerts.

According to the New York Audio and Video Recording Law, “it is a criminal offense to use any device to record, obtain, share or use communications, whether they are wire, oral or electronic, without the consent of at least one person taking part in the communication.”

“So they’re like listening to us and watching us?” Carlson trails off as a customer walks into the store.

In the comments section, viewers did not hold back when providing their opinions.

“Babe it’s your job, not your house. It’s pretty normal to have security cameras. What are you doing at work that you’re worried you’ll be caught doin?” one user asked. Carlson responded, saying that “giving us feedback from listening to us from the camera is an insane privacy no no. I don’t care that they’re watching! That’s normal.”

“Just start saying, ‘’Alexa, how do I form a union?’” another user joked.

“That happened to me at a very toxic job I had. Just quit now…From my experience, it’s just going to get worse,” a third user shared.

The Daily Dot reached out to Carlson via email.