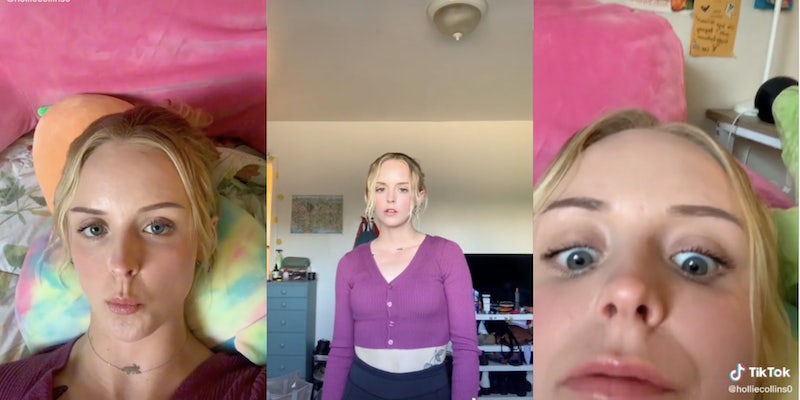 ‘You make me look like a dirty f*cking wh*re’: Restaurant customer loses it after server sits her at the bar before her seating party is complete

'People are ready to fight over this [seating] policy.'

In a viral video posted on Jul. 21, TikToker Hollie Collins (@holliecollins0) shared an interaction she had with a woman at the restaurant she works at. The woman was upset that she was seated at the bar due to the restaurant’s seating policy.

The restaurant’s policy, one that many restaurants adhere to, states that a group can only be seated if their whole party is present, Collins says. If not, customers can wait at the bar.

“This lady comes in yesterday and she said she was going to meet somebody there for a business meeting but he wasn’t there yet,” she says in the clip. “So, my host asked her to go sit at the bar and said that we would seat her as soon as he got there.”

After being in the restaurant for about three hours, the TikToker says the woman asked her to close her out.

“I go to close her out and she’s like ‘can I say something to you?’” she says, moving her finger around to imitate the woman.

“She was like, ‘your seating policy is fucking stupid,’” the customer allegedly said. “I’ve heard this many times before so I was like, ‘yeah, I’m sorry about that. I know it can be pretty frustrating to have to wait for your table. It’s just a policy our owners have and that’s just the policy we have to go by.’”

According to the creator, the woman then told Collins that when you make a woman sit at the bar, you make her look like “a dirty fucking whore.” She then purportedly proceeded to call the hostesses the “c-word.” Collins, who says she has dealt with verbal assault from customers before, tried to walk away from the table but the woman continued to complain.

“I eventually interrupted her and asked if she wanted to speak to a manager just so I could get the fuck away,” she said.

Collins explains that once the manager came over, the woman continued ranting, saying, “you guys made me look like a dirty fucking whore.”

“Her entire premise was that women who sit at bars are stupid whores,” Collins says. The manager then allegedly asked, “if we made you feel [that way], why did you stay here?” to which the woman stormed out.

In the comments section, one user pointed out that meeting a business partner at a bar could be considered unprofessional while others agreed that the seating policy is pretty standard.

“Not your fault but that rule is pretty crazy, it looks so unprofessional to meet someone sitting at the bar,” the user said.

Collins replied, saying, “now thinking this… may be a city thing. Doing remote work whether alone or with a partner in a restaurant/with a beer at a bar top is so common!”

“People are ready to fight over this policy. “They’re just parking their car” cool, so you won’t be at the bar long,” another commented.

“I think it was the wine,” a third user stated.

“Hate to burst the bubbles in here but: 1) It was a real business meeting 2) her husband looked scared of her lol,” she wrote.

In a follow-up video, Collins explains the importance of having this particular seating policy in restaurants.

“This policy assures that restaurants can keep their sales up and that they’re not missing out on money they could be making,” she explains in the clip.

She continues that if only two people out of a party of six show up, they will make you wait.

“Because if the two of you go sit down at a six-top and for some reason, your party doesn’t show up, now you’re eating at a six-top when we could’ve put you in two-top,” she explains. “And there are people waiting outside for that six-top. Either way, we’re losing money – not just the restaurant but the servers are losing their tips.”

“It’s not only good owners but good servers who want this policy to be enforced,” she says in the clip.

The Daily Dot reached out to Collins via Tik Tok comment.