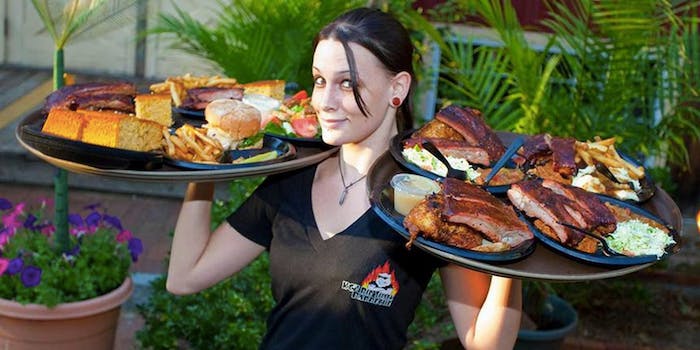 Is this the real life? Is this just fantasy?

Rants from restaurateurs about one-star Yelp reviews are never a good look, but we can forgive the proprietor of KC’s Rib Shack in Manchester, New Hampshire, for speaking up about a recent atrocity of etiquette.

Earlier this month, KC’s Rib Shack owner Kevin Cornish allegedly told a group, there to celebrate a birthday, to pipe down after they began boisterously singing in the dining room. After the impromptu karaoke incident, at least two members of the 20-person party left one-star Yelp reviews for the restaurant.

Although one of the comments appears to have been deleted, this one from Kris K. in which he complains of being “rudely” told to be quiet by Cornish, is still up.

“Not one person there was upset that we were enjoying ourselves,” wrote Kris K. “Now mind you there were about 10 others in the bar and they were all laughing and having fun with us including the bartender and wait staff,” Cornish quoted Joyce Couturier Denham as saying in her now-deleted comment.

Cornish responded to both on Yelp and Facebook in a heated open letter. “I realize you felt as though everybody in the entire restaurant was rejoicing in the painful rendition of Bohemian Rhapsody you and your self entitled friends were performing, yet that was not the case,” he wrote. 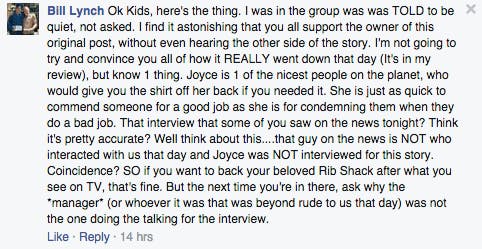 It may remain a mystery as to just what happened at KC’s Rib Shack but, if you’re going to terrorize a family restaurant with your bad renditions of Queen songs, maybe try “Don’t Stop Me Now.”