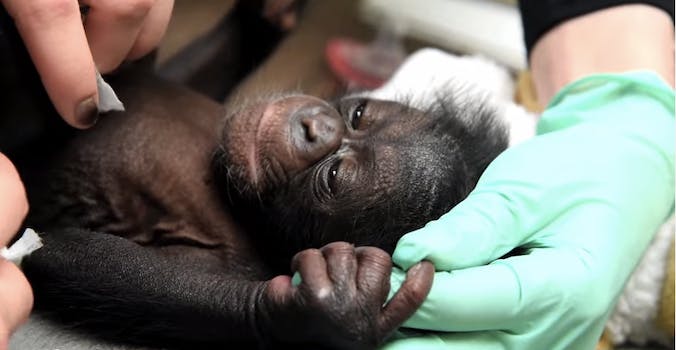 Baby Keeva gets a happy ending after all.

Chimpanzees—they’re just like us: Sometimes their mothers abandon them. That’s what happened to the Maryland Zoo’s chimp Keeva, the first baby of 27-year-old mother Carole.

“It soon became apparent that Carole was not adapting to motherhood appropriately and we made the difficult decision to remove and hand-rear the baby while searching for a suitable home with a nurturing surrogate,” wrote Mike McClure, the zoo’s general curator, in a press release.

Keeva was cared for 24/7 by employees at the zoo as they searched for a suitable surrogate mother, and they eventually found one at Tampa’s Lowry Park Zoo: “32-year-old Abby, a trusted nurturer,” who has already fostered three chimps before.

Here’s a photo of Keeva in transit on a private jet, because she’s one badass little chimp. 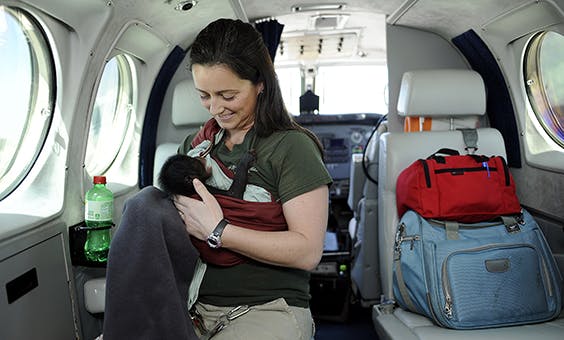 Where do we sign up for the baby-chimp-swaddling job?

Keeva is now safely in Tampa and will remain under the care of zoo employees there until she’s settled enough to meet Abby. How awesome would it be if human adoption functioned this way?

It’s easy enough to blame Carole in this situation, but let’s try to keep an open mind: I’m 28, and the prospect of motherhood is not something I want to embrace anytime soon. And if I get pregnant, at least I have the option of making my desires clear via spoken language. Not sure if “I really wasn’t ready for this, I have my whole life ahead of me and motherhood is a huge responsibility, I want to give the baby up for adoption” is communicable in chimp gestures.

Good on Carole for expressing her needs in whatever way she could. We wish her and Keeva the best in their future, separate endeavors.