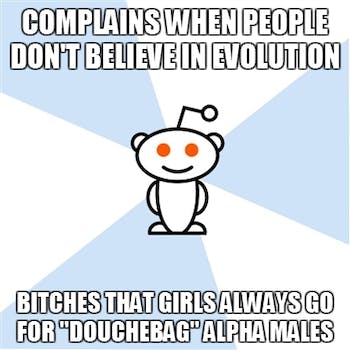 Evolutionary anthropologist teaches redditors what an alpha male really is.

On many sites, when a childish and factually inaccurate image meme is released into the wild, it often goes unchallenged, allowed to proliferate unchecked like some creepy asexual fungus.

Earlier today, the image, “Typical Redditor” below (a play on the scumbag Steve meme), briefly made it to site’s front page. 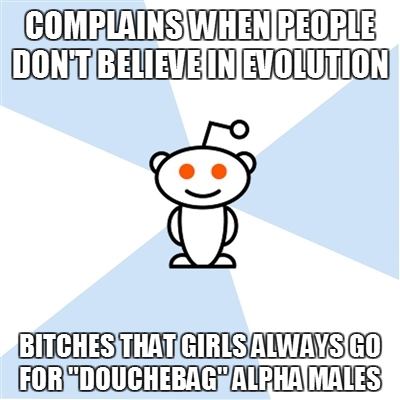 The post drew thousands of comments. But then a commenter claiming to be an evolutionary anthropologist put the poster and the image firmly in their places.

“There are many misconceptions I see in this post and the comment section,” wrote redditor PrimateFan, who then proceeded to fully dismantle the simple suppositions made in the image with a four point essay.

The main points were as follows (but be sure to read the full comment):

1. Humans don’t have alpha males.
2. In species with alphas, the alpha males aren’t always the biggest, meanest males.
3. In socially intelligent species (like us), the alphas are the ones with the best social strategies.
4. The alpha male only rules by the acceptance of the others, particularly the alpha female.

PrimateFan’s comment became popular fast, receiving 428 upvotes and rising to the top of the original post. It was even featured in the subreddit r/bestof, where other users post what they believe to be top comments from across the site.

Redditors immediately began asking PrimateFan to evangelize the points in the essay elsewhere.

“Please go to r/seduction and tell them this,” wrote mariposa888, referencing a subreddit notorious for its posters’ at times childish and chauvinistic attitude towards women. “Now. Right now.”

“I’ve found that when I give people advice in person,” replied PrimateFan, “most individuals simply don’t want to make the changes necessary to get good quality mates. They prefer cliches, simple theories, and going after certain types of mates despite bad track records.”

Reddit: Where educated rants can finally find an audience of millions.

And where image memes better be scientifically accurate if they hope to survive the downvote gauntlet.