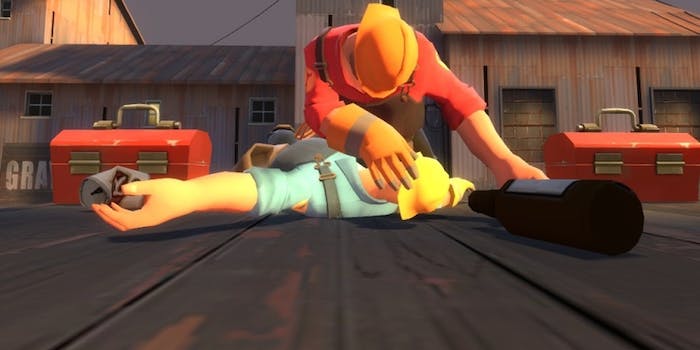 Redditors band together to discourage suicide

A community of Team Fortress 2 players recently came together on Reddit to save the life of a fellow player.

While both RED and BLU players may get caught up in the chaos of the Team Fortress 2’s virtual battlefield, they’re all on the same team when it comes to real-world life-or-death situations.

Redditor Manncomann visited r/tf2, the subreddit dedicated to the multi-platform video game, and offered to raffle off his battle points—but for a very disturbing reason.

“Here’s the story, I recently made a Bad decision in my choices, I made an incredibly rude joke to a female friend and I’ve only been getting harassed by her friends and mine, I feel like I might not be around much long due to myself… So I might raffle off my Bp. Nothing more can be said. It’s been fun,” he wrote.

The community put aside their love of such incentives for a far more important cause: talking Manncomann out of his decision.

“Look, you don’t have to do this. Get some help. I don’t really have any experience with this but this website: http://www.suicidehotlines.com/ looks like it has some useful links, no need to do anything rash” redditor i_suck_at_stuffs said.

“Someone close to me committed suicide recently. I wonder every day if I could have prevented it in some way. Even if you hate your life, don’t do it. For my sake, and for your family’s,” redditor WatsAUserName added.

Additionally, several redditors chimed in with the adage that “suicide is a permanent solution to a temporary problem.” But Mancomann wasn’t hearing any of it.

“If I were to do it, I would at least leave something to tell [my parents] it has nothing to do with them, my biological dad hates me anyway” he said in another comment.

It was redditor GMY0da whose heartfelt sentiment not only swayed Manncomann the most, but also moved the entire community as well.

“Seriously though,what’s going on? I used to want to do something like that too when I was just a kid. Literally,90% of the grade bullied me,and I did some stupid stuff. Listen,if you want a bro to chill with,I don’t care if you’re two feet tall,with 800lbs,I’m willing to. And if you aren’t comfortable with some guy on the net who’s dealt with this stuff too,by all means,find people who you do want to talk to. And if you don’t have much? Believe me,redditors can pull off some pretty awesome stuff if you get them to do it. Seriously though,if you just want to talk sometime,let the feels flow, ring someone up! Hell,if you want,I’ll talk to you if you’ld like. Know that,people shouldn’t judge you! And the female friend. If she just completely flips you off for making a joke that she doesn’t like,then maybe she isn’t the best friend to have. Still,if you can,even through a text or Facebook message or something,just say sorry and things should work out. And if they don’t,people are here to help you,me included. I know what it’s like to feel like it will seriously never get better,and that you have no one on your side. But that’s why I’m posting this. It doesn’t have to be that way! It can be different! Just never,ever give in. My mentality when I had troubles was just to keep thinking of a brighter day. Knowing that something could change. That tomorrow could be a better day. But you might be thinking “No,it could get worse,” well if it does,then bear through it! I know folks who only didn’t off themselves because they told someone about it,and they helped! Seriously, if you think that tomorrow is going to be a darker day,it might be! But just keep thinking that that’s the storm before the calm. And hey,don’t be afraid to ring up a good friend,even it they’re on reddit only. Most will help!”

“This is why I love you guys, thank you, I sent her a message and I got my girlfriend off her side so we’re back together,” Manncomann replied.

Later that day, Manncomann edited his original post with an update—and also gratitude.

“I love you guys, thank you for helping me /u/GMY0da,” he wrote. And he might have even gotten some new friends out of the ordeal: “You guys can add me on steam; I don’t have my new hard drive my name is Cordyceps.”