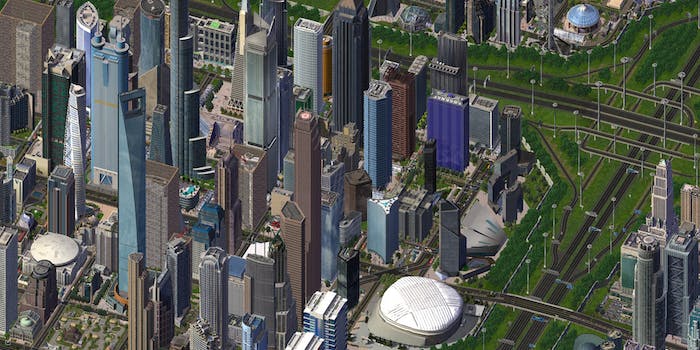 A gamer no longer has to worry about his disability preventing him from terrorizing his own metropolis with an alien invasion.

A gamer no longer has to worry about his disability preventing him from terrorizing his own metropolis with an alien invasion.

When redditor joey6957 became interested in SimCity, he quickly discovered that his physical disadvantages were keeping him from its full potential.

He explained in a post on r/SimCity how his mouth-controlled device limits his ability to execute multiple commands:

When you put a road on the map you use the mouse clicker & hold it while determining where to put the road & at the same time you press the N key or M key to lower or raise the the road. When i lay a road down i use my Quadjoy which the device only allows you to do ‘1 thing at a time.’ In other words I cant press the N key or M key on the on screen keyboard while laying a road.

Redditor ProcsKalone immediately jumped to the rescue. With a passing knowledge of Autoit, an automation language program, he got to work on a code that “sends the ‘n’ or ‘m’ key every 1 second to SimCity,” thus eliminating the need to do so manually. After programming several other keyboard functions, tweaking the command that switches the automation on and off, he submitted the link to joey6957.

“[You’re] a genius it works perfectly!” he wrote. “I hope I didn’t keep you up trying to get this working for me. Thanks a lot for the help buddy!”

“I’m sure you’re getting a heavy dose of PMs right now since this post of yours went on /r/bestof,” greenblaster wrote, “but I wanted to say that you’re an awesome person for putting so much effort into helping a stranger while having nothing to gain.”