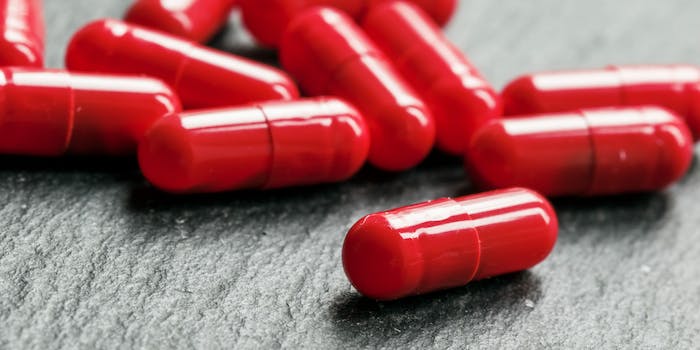 What a damning web this state representative has weaved.

A new report from the Daily Beast alleges that a Republican state representative for Laconia, New Hampshire, is one of the secret founders and architects of Reddit‘s infamous “The Red Pill,” a subreddit dedicated to the work of men’s rights activists to subvert “rampant feminism” and devise pickup artistry techniques.

In the piece published Tuesday, contributor Bonnie Bacarisse connected a web of internet aliases to Rep. Robert Fisher—including the rep’s blogs on dating culture, his high school social network programming experiment, his run for office, his privately-owned businesses, and his one-man band—to reveal him to be the misogynistic Red Pill kingpin.

While 31-year-old Fisher merely lingers and “pops in” on the subreddit these days, Bacarisse points to a few of Fisher’s posts since his supposed brainchild launched 2012, revealing that he feels unchecked feminism has allowed women to trap multiple men into financially supplementing their lives with child support, and that the institutions of marriage and religion have been demolished by women’s equality.

On the subreddit, Fisher allegedly bragged about his ability to have sex with multiple women without the women knowing of each other, though he also expressed frustrations with his business and political accomplishments hindering his ability to impress women.

“[Fisher] blasted women for their ‘sub-par intelligence.’ He said that women’s personalities are ‘lackluster and boring, serving little purpose in day to day life.’ And Fisher once commented, ‘It is literally the [female] body that makes enduring these things worth it,'” Bacarisse wrote. “[Women] were uninteresting, immature, unintelligent, lacked depth, and were entitled. He bemoaned that dating was easier for women. He felt it was unjust that women get a free ride, believing ‘a pair of boobs grants [them] equal footing with somebody bringing intelligence or a personality.'”

The most damning piece of Bacarisse’s investigation into Fisher’s internet personas involves the Red Pill’s obsession with the idea of false rape accusations, a theme that men in the subreddit discuss eagerly with the notion that women accuse men of rape because they feel guilty having consensual sex, or do so out of spite, and not because they were actually raped. Fisher allegedly posited that rape isn’t “bad,” and even normalized the idea of men preying upon underage girls.

“He wrote, ‘I’m going to say it—rape isn’t an absolute bad, because the rapist I think probably likes it a lot. I think he’d say it’s quite good, really.'” Bacarisse wrote. “Though he stated he ‘doesn’t advocate breaking the law,’ Fisher said online in 2012 that a 40-year-old man asking to see the breasts of a 15-year-old wasn’t creepy. Instead, he said it was ‘evolutionarily advantageous and perfectly natural.'”

Bacarisse said when she contacted Fisher by phone, he denied his participation in the Red Pill and claimed to not know what it was. But hours later, the two primary Reddit usernames connected to Bacarisse’s investigation were wiped, and the four blogs in question were deleted or made private.

Other New Hampshire politicians are already calling for Fisher’s resignation. Less than 12 hours after the Daily Beast went live with the story, State Rep. Amelia Keane of Nashua, executive director of the New Hampshire Young Democrats, issued a statement decrying Fisher for the allegations made in the report, and called for his fellow Republicans to call for his resignation, too.

“There is no excuse for the type of hateful and ignorant rhetoric anywhere in our state, none the less from someone elected to our State House to serve the men and women in his community,” Keane’s statement reads. “If Rep. Fisher has any semblance of decency or shame left, he will resign his seat.”