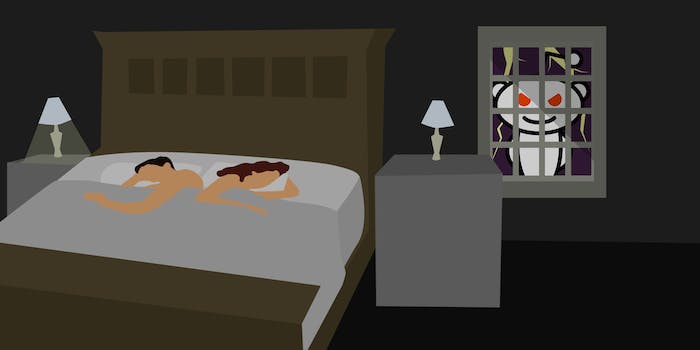 You can close the tab, but you can’t escape the nightmares

On NoSleep, your worst nightmares are true—even when they're not.

He finished reading the story and got up to turn on every light in the apartment. He also turned on the TV to watch whatever childish cartoon he could find—anything to scrub away the unnerving image imprinted on his mind.

It didn’t work. He still couldn’t sleep. In fact, it would be a few nights before he could sleep well again.

This is a familiar routine for nobody554, one of the longest serving moderators of Reddit’s r/nosleep.

The forum is home to some of the Internet’s most haunting original stories. These aren’t tales filled with bloodied corpses or chainsaw-wielding sociopaths. They’re much more unsettling than that. They draw you in with deft storytelling that will keep you up late at night, rocking back and forth and staring at the end of your bed.

Over the course of their two-year long-distance relationship, Linh and her boyfriend texted, called, and webcammed each other constantly. But things took a strange turn when Linh’s father died unexpectedly.

“She explained to me that being in the house alone without her dad was emotional and may be playing tricks on her,” her boyfriend said. “She hated the feeling of being so alone. She told me that being able to see me on her webcam was the closest thing she had to family, and asked that I promise to never turn off the webcam. She meant the world to me, so I was happy to oblige.”

Linh’s boyfriend had just finished his final exams. In just a few days, he’d be hitting the road to visit her. But that night, he dozed off after drinking a bit too much wine. He awoke to a webcam call at 3am. It was Linh, who loved calling him at strange hours of the night to flirt. This time was no different, only their conversation was cut short when their call was abruptly disconnected. He got up to get a drink of water. That’s when he noticed his webcam was still on. Taking up most of the screen were Linh and her puppy. But off to the side, almost near the edge of the screen, was something else.

I wiped my eyes and looked again.

It’s… standing in the corner of the room. It’s…

That’s the setup for “Don’t Turn off the Webcam” by redditor 0450AZ001, the story that had nobody554 rushing to the lightswitch. We won’t spoil the rest of the story, but it accurately reflects r/nosleep’s two most important tenets: suspension of belief and reader interactivity.

For the past three years, NoSleep’s guiding statement has been “Everything is true here, even if it’s not.” While it’s easy for outsiders to disregard as a typical horror story ploy, the statement has been instrumental in shaping the community.

“[It] started out as a simple method of trying to keep users from debunking the writings of other users; however, it evolved into a broader ruleset of keeping the stories realistic so that it feels as if you’re in a dark theater by yourself, watching a movie, and getting pulled into the action,” nobody554 told me. “The posts that have been the most effective and raised the most discussion have always felt the most real; as if it could happen to you this very evening.”

Nobody554 wasn’t the only redditor freaked out by “Don’t Turn off the Webcam.” More than 200 other readers found themselves up at night in a cold sweat as well.

“I was so mesmerized that when my narcissistic cat barged in my room and my door flew open, I completely tensed up and almost had a heart attack,” eatthecake commented.

“I used to read these during the day in my old job,” FollowRafiki said. “Alone in a warehouse, I can confirm daytime does nothing to help. Especially when I was leaving, there was about a five second walk to the door after I turned the lights out. Only light was the light coming from the door I was headed to. Was so sure it was going to close on me one day, and I’d have a good NoSleep story.”

Each day r/nosleep receives hundreds of submissions from aspiring and established writers eager to see whether they can chill the spines of its 186,000 subscribers. And, as in the horror film genre, the stories often follow trends.

In the early days of the subreddit, it was common to read tales of demons, child abuse, or the horrifying things that happen to people who answer random payphones. Lately, r/nosleep has favored elaborate multi-part series and puzzle posts that have required heavier moderation.

“Submitters started posting a multitude of stories with jumbled/anagrammed words that hid some demonic messages,” TG_Alibi explained. “It all stemmed from an extremely popular series that was posted and took on a life of its own.”

The author of that series is one of r/nosleep’s most prolific contributors and one of the few who has translated his Reddit fame into real world success. That user is 1000vultures, otherwise known as Dathan Auerbach.

Auerbach, 28, has written five of the top 25 r/nosleep posts of all time. Most of those stories belonged to his six-part series, Penpal, which recounts unexplained occurrences from Auerbach’s adolescence that would leave even professional paranormal investigators like the Warrens stumped. Auerbach wrapped up the series in October 2011 while sitting in his favorite rocking chair at home in northern Florida. But thanks to the support of the r/nosleep community, he wasn’t finished yet.

He revised and expanded each of the stories over the next six months, and in April he launched a Kickstarter campaign for his book Penpal. He asked for $1,500 to help cover the costs of getting the book published.

“There are people from all over the world who have asked to adapt sections of the story into podcasts, short films, comic books, concept albums, and art pieces,” Auerbach wrote on Kickstarter. “Several educators have even gone as far as incorporating the story into their curriculum. Needless to say, I’ve been staggered by my story’s reception.”

By May 2, Auerbach had raised nearly $16,000. He spent the next three months hustling to fulfill the hundreds of Kickstarter orders. During this time he was also contacted by the Oscar-award winning producer of Undefeated.

“I’m in a deal with producer Rich Middlemas, and we’re working on getting the book version of my stories adapted into a film,” said Auerbach, who is also a philosophy teacher. “That’s a super exciting prospect. It’s a slow road, but I’ve got my fingers crossed.”

On April 24, 2012, blue_tidal gave r/nosleep “The Smiling Man,” a haunting tale about a late-night run in with a deranged stranger who danced as he walked, face twisted into a creepy smile. The story was such a huge success it caught the attention of filmmaker Michael Evans, who adapted it into a short YouTube film called “2AM.”

The video is about four minutes long and, like its source material, has only one line of dialogue. It has been viewed more than 1.6 million times.

But blue_tidal and Auerbach aren’t the only ones who’ve had their lives changed by r/nosleep. Once you’ve become a regular reader, there’s no way to get these unsettling stories out of your mind.

After a long day at work, r/nosleep moderator RastaMom used to enjoy winding down with a nice walk or jog. She’d usually wait until it was dark out and no one else was on the street, and she could run in peace. After reading “The Smiling Man,” and getting sucked into the world of Reddit horror stories, all of that changed.

Now Rastamom will always be looking behind her. But, like the other regulars on NoSleep, that’s the way she likes it.

“I still look over my shoulder more thinking, What if…?” she said.