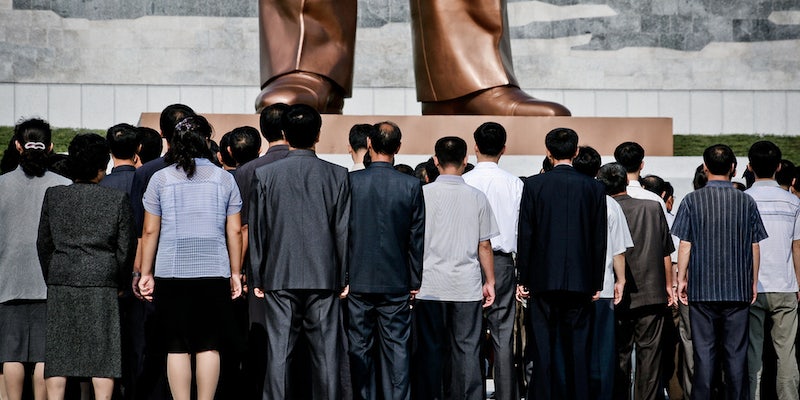 This holiday, one brave underground organization is turning to the Internet to help them help North Koreans. And Reddit is responding.

This holiday, one brave underground organization is turning to the Internet to help them help North Koreans. And Reddit is responding.

Escaping from North Korea is a dangerous, arduous ordeal that usually ends with the refugee being caught in China and being promptly returned to North Korea to face imprisonment or worse. Nor do refugees have safety in numbers; groups larger than five are easy to detect—and arrest.

The nonprofit organization Liberty in North Korea combats the dangers North Korean refugees face by helping them along a 3,000-mile “underground railroad” network of support through their journey from Korea into China. The network of support on the Chinese leg of the journey is perhaps the most risky, due to the possibility of being informed upon, captured, and repatriated.

Earlier this month, Reddit’s r/northkoreanews stepped up to fundraise for the cause, hoping to raise the $2,500 necessary to safely help one person escape through Liberty in North Korea’s refugee program.

NorthKoreaNews is a relatively small subreddit, with only 11,000 subscribers. Still, one redditor urged the group to try and make the $2,500 mark by Christmas—and the Redditors came through.

As of Christmas day, their total stands at $2,700, enough to see one person safely out of the country—and even more importantly, allow them to begin a new life in South Korea. Without that network of support, some defectors end up in South Korea with no money left and no way to sustain themselves. A handful even wind up returning to North Korea voluntarily.

“Generally, people think of North Korea merely as our enemy or a people to pity,” Ji said. “We are trying to change this, looking at North Korea as two entirely different entities: its citizens and its government.”

In the wake of Kim Jong-Un’s unexpected execution of his uncle and chief aide, possibly while drunk, high-ranking officials are fleeing the country.

Meanwhile, other nonprofit groups like the NKHR Rescue Fund are also putting North Koreans along the “underground railroad” to freedom—hopefully for good.