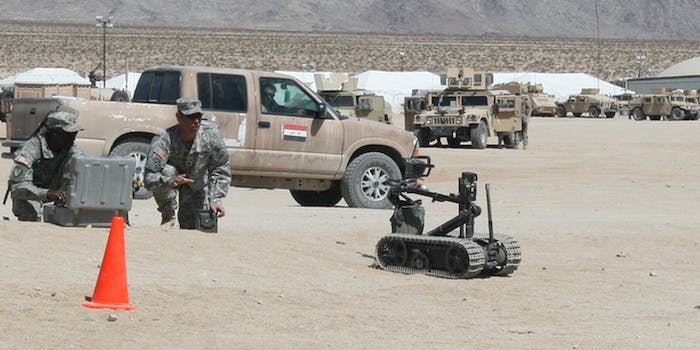 Soldiers on Reddit talk about relationships with their robots

Some bots get funerals, others are a nuisance.

University of Washington researcher Julie Carpenter recently interviewed 23 explosive ordnance disposal military personnel about the emotional attachment they develop to their robots in the field. Many give them names, or assign genders. One common situation: The “first reaction to a robot being blown up was anger at losing an expensive piece of equipment, but some also described a feeling of loss.”

PBS NewsHour picked up her story yesterday, which led to discussion threads on Reddit. Several military members talked about their own experiences with robots. One thread on r/Military describes a funeral for a lost bot:

… Some of the grunts I worked with lost a MARCBOT and they awarded him a Purple Heart, BSM, and they did a full burial detail with 21 gun salute at Taji. Some people got upset about it but those little bastards can develop a personality, and they save so many lives.

That same redditor, mastersterling, also described clearing an IED on a bridge with a bot nicknamed Danny DeVito:

We sent our little Pacbot (already named Danny DeVito) down to drag the Talon back to safety, which it could not do. So we had the Pacbot hook a rope to the handle and pulled it back to the middle of the road manually while Danny went down and manually ripped the device apart. This was around the time Owen Wilson tried to kill himself, so we ended up calling our Talon Owen Wilson.

On r/technology, The_Real_Opie offered a flipside to the empathy, when they grow to resent the bots:

It would frequently accelerate for no fucking reason, steer whichever way it wanted, stop, etc etc. This often resulted in this stupid thing driving itself into a ditch right next to a suspected IED. Budgets were tight (USMC) and support was hard to get. So we couldn’t get a new robot because no money, and they refused to send this one off to be fixed because there wasn’t anyone around to do that in anything approaching a timely manner.

And others were a bit more cynical about the idea of empathy:

See, this is how it starts. When Skynet goes live, I just hope people are willing to pull the trigger when their cuddly bomb-disarming robots are trying to disassemble their families.

But many were quick to point out this is no different than naming a gun, or a truck, or a ship. As Carpenter mentioned in her study, troops’ relationship with robots will change as the technology does. Whether it’s actually affected outcomes on the battlefield is still up for debate.

Photo via the U.S. Army/Flickr