Former Redditors and married couple Dan McComas and Jessica Moreno are on a mission to create a new and better Reddit—and they’ve enlisted the help of Lena Dunham’s LennyLetter and Community creator Dan Harmon. Say hello to Imzy.

The concept of Imzy, which is currently in beta, is relatively straightforward: There are different community pages that are organized around individual topics or people, kind of like a fan page.

Last year, McComas was part of a group of Redditors who left or were fired during the company’s reorganization. Recode reports that six other ex-Redditors are also involved in Imzy, and the project will include a commerce angle, in which community members can donate money to support volunteer moderators. The site will also focus on safety and is bucking the trend of ads.

Aesthetically, Imzy won’t have anything resembling Reddit’s front page, and in order to post or access the site’s content, you will need to be a member.

“What if someone tried building a community platform from day one? Is the terribleness just an inherent part of the Internet [or] can communities be made online in a healthy way?” McComas said. “It might not work out, but I hope it does.”

For its own part, the Reddit community is already skeptical about Imzy. 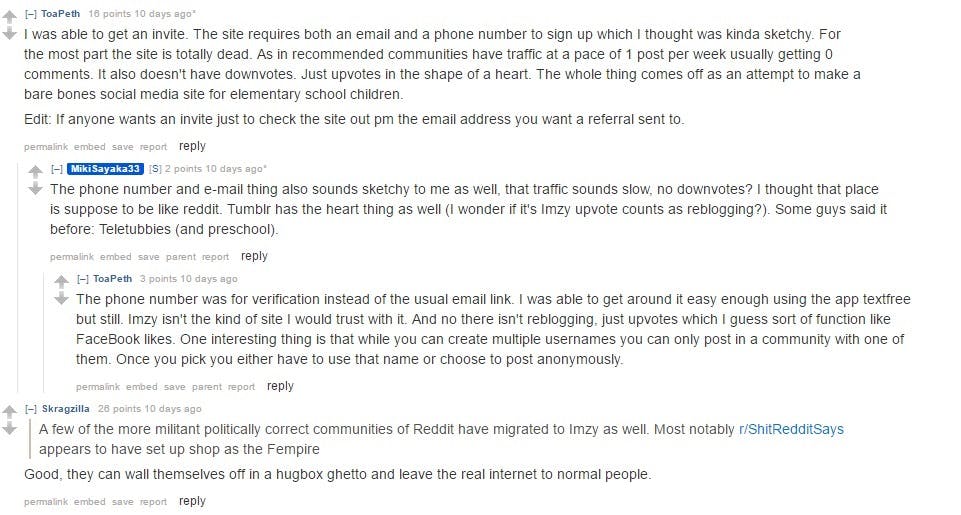 As one commenter noted, “Good, they can wall themselves off in a hugbox ghetto and leave the real Internet to normal people.”