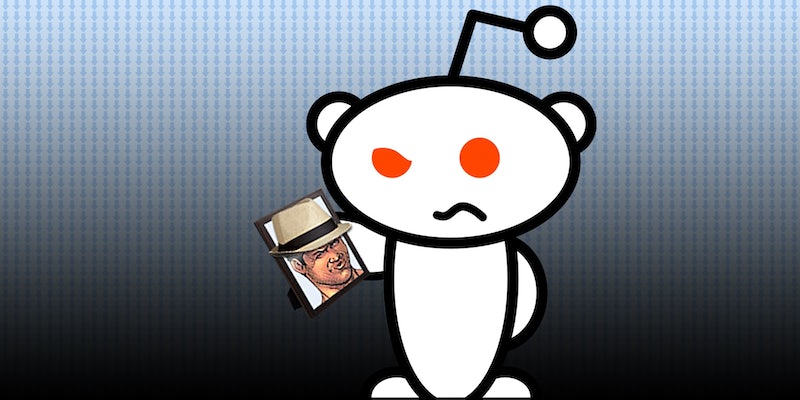 The dark side of Reddit’s cringe culture

On Reddit, it's difficult to tell where cringe culture ends and bullying begins.

“Cringe” has become part of our shared lexicon—a catch-all for all things awkward, painful, or embarrassing—and it’s never been more popular.

Countless new listicles have made the rounds online, lowering the bar for social content with articles like “Embarassing Moments: 3 Cringe-Worthy Stories From Real Teens” and “The 21 Most Cringe-Worthy TV News Moments of 2013.”

Like most things on the Internet, the phenomenon can be traced back to social news site Reddit, and one moderator in particular, a guy who goes by the alias drumcowski.

Over the past two years, his r/cringe (anything goes) and r/cringepics (photos only) have amassed 500,000 subscribers and more than 30 million monthly pageviews combined. They’re an institution on Reddit. R/cringepics and r/cringe also rank as the 22nd- and 57th-most-active subreddits, respectively.

But their popularity has come at the expense of their subjects—anyone unfortunate enough to be caught in his or her awkward stage.

Redditors worked tirelessly to bring amateur cringe content to the masses, and they did so by grabbing screenshots from their Facebook and Twitter feeds. “Amateur” is the key word here: The kids whose social flubs land on r/cringe are just that, kids—teens, tweens, and even younger. They don’t know when they’re being reposted. And then they’re subjected to hundreds of Internet commenters mocking them.

In one shot, a young girl poses for a selfie with the caption “I get noticed cause I’m gorgeous…the rest of you are dogs.” This is the response she got on r/cringepics:

In a video on r/cringe, a teenager screams a rendition of One Direction’s “What Makes You Beautiful.” This is what some in the community had to say about it:

Cringe fans might say making fun of these kids is harmless. But the community has been labeled as some of the Internet’s most vicious bullies—a claim drumcowski doesn’t deny. The forums have devolved into something darker than he imagined.

Drumcowski was sitting in a hotel room in Manhattan in the summer of 2012, bored out of his mind. Like any other 20-something college student, he fired up his laptop and began browsing YouTube for funny videos. He stumbled upon a May 2010 clip called “Teen Werewolves,” a local news segment on a new high school trend featuring students pretending to be werewolves by howling, wearing fake tails, sharp teeth, and animal contact lenses.

“I struggled to finish it,” drumcowski told me over Skype.

The video also got drumcowski wondering: Was there a place on Reddit where people could find videos like this? There was: r/cringe had only one subscriber. On July 7, drumcowski, already the moderator of offensive-jokes forum r/ImGoingToHellForThis, messaged its creator, ABsynth808, and was ultimately given the subreddit.

Drumcowski was methodical with the r/cringe relaunch. He set up an RSS feed to alert him whenever someone mentioned the word cringe anywhere on Reddit. Every time, he’d pop in the thread and encouraged people to visit r/cringe. That’s where drumcowski began posting videos like “Teen Werewolves.” His goal wasn’t to mock the kids who made them; he was trying to elicit empathy from the viewer.

“You can kind of put yourself in their shoes,” he told me. “If someone is doing something embarrassing and they might not notice…I’ve done that plenty of times. And you think back to those moments today, where they’ll just pop up in your head and you’ll spend an hour trying to push them to the back of your mind.”

That month, r/cringe collected 10,000 pageviews. By September, that number ballooned to 941,000, largely thanks to a plug on r/askreddit and a bump from r/subredditoftheday, to key hubs on Reddit.

“That was pretty cool,” drumcowski said. “Then the next month we had 5 million. It was surreal.”

That excitement came along with a different sort of cringeworthy content. Instead of videos, this new flock of redditors were sharing screengrabs captured from the social media pages of unsuspecting friends and complete strangers. For example, this screenshot of a woman showing off her new haircut on Facebook, and an admirer who won’t stop writing “text me”: 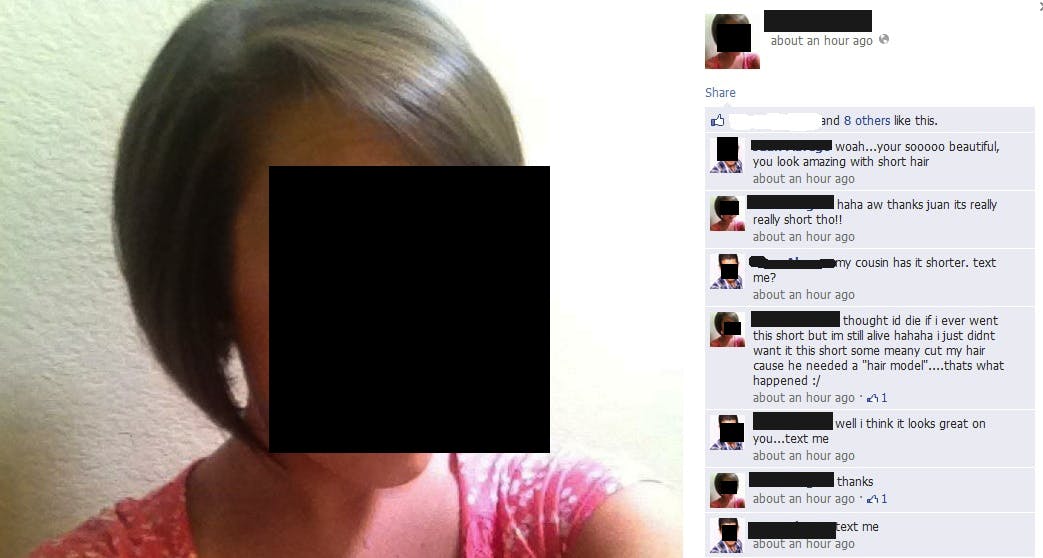 To drumcowski, images like this were a cancer that needed to be excised from r/cringe.

“I never saw an image that was cringeworthy at all,” he said. “You don’t get to see a situation, you get to see this one brief perspective of something.”

So on Nov. 9, drumcowski banned all images from r/cringe and relegated them to a spinoff subreddit, r/cringepics. The community was not happy. It didn’t like being having its content banned. Redditors worried that a new subreddit would fragment the community and stifle growth.

“I think it’s absolutely ludicrous to split up a subreddit when cringe material comes in many different formats,” myphantomile commented. “While I’m sure some images aren’t all that cringeworthy, there are definitely videos that aren’t as well. I just can’t see the point behind this.” There was even a petition started to have the changes rolled back.

Drumcowski remained steadfast in his decision. Over the next few months, r/cringepics would overtake r/cringe in traffic and number of subscribers. It also bested several default subreddits—forums new redditors are automatically subscribed to. Cringepics beat just about every other nondefault subreddit in subscriber growth.

With two subreddits growing so fast, drumcowski began adding moderators to combat their No. 1 problem: bullying.

In any given post, drumcowski saw people leave empty death threats and hurl hurtful obscenities. One of the first moderators added to r/cringe to attack this issue was manwithoutmodem, a known taskmaster—he was one of the redditors who helped take down the popular meme generator Quickmeme for vote manipulation.

“We try extremely hard to curb the bullying issue,” manwithoutmodem told me. “It has a lot to do with people trying to use the subreddits as platforms to embarrass people they know.”

Today, the bullying is more rampant than ever. And as a result, the moderator list for r/cringe and r/cringepics have amassed more than 60 redditors and a laundry list of rules, including “no content featuring minors” and a ban on links or references to a person’s social media account—an effort to curb real harassment.

During the first 20 minutes of my interview with drumcowski, six posts were hidden and nine comments were deleted from r/cringepics alone.

“Our biggest focus is to make sure that we don’t let this place turn into sort of this bullying page, which a lot of people say it is,” drumcowski said. “A lot of people could argue that it has turned into that. People are just hateful and hide behind usernames.”

With so many ongoing issues, and more time spent policing the subreddit than fostering it, is r/cringe worth keeping around? What purpose does it serve to call out terrible fashion choices, awkward videos, oversharing, and inappropriate come-ons by publicly shaming the worst offenders?

Even Erik Martin, Reddit’s general manager, has gone on record with his disapproval of the subreddit, saying in a company AMA (“Ask Me Anything”) last March he hates “r/cringepics and anything cringe related and the whole idea.”

The subreddits have weighed heavily on r/theoryofreddit, a Reddit hub for discussions about Reddit itself, for more than a year. The general consensus: Shut r/cringe and r/cringepics down.

“Why does it matter what the intention behind the creation of the subreddit was?” topdebottom commented on Nov. 17. “People go on there to feel better about themselves by judging other people. That’s shitty behaviour, full stop. The mods hiding behind good intentions doesn’t make the behaviour of the subscribers any less shitty. If the moderators actually felt bad about the bullying, they would just close the subreddits down.”

Drumcowski argues that if both subreddits were to close, others with less moderation and more lenient rules would likely surface in their place. (This was the case when Reddit shut down r/creepshots, a forum for sexualized photos of unsuspecting women. A year and a half later, copycat subreddits are thriving.)

“Our mods ban numerous people per day and remove dozens of posts and comments that seem aggressive or detrimental,” drumcowski commented. “Obviously we can’t get everything, the subreddits are hugely active and we are volunteers who do this in our spare time. I guess my point is—there’s a lot we do that goes unseen, and I believe our heads are in the right place when it comes to policing the subreddits.”

Today, drumcowski spends most of his time on his favorite subreddit, r/showerthoughts, a place for people to share “ideas or philosophical questions that race through your head when in the shower. No matter how absurd, or how incoherent.”

With only 11 moderators, r/showerthoughts runs smoothly on its own—despite boasting 165,000 subscribers.

Drumcowski hopes to keep it that way.

“It’s drama-free,” he said. “The content is spectacular. It’s a subreddit I can finally say I created and be proud of.”