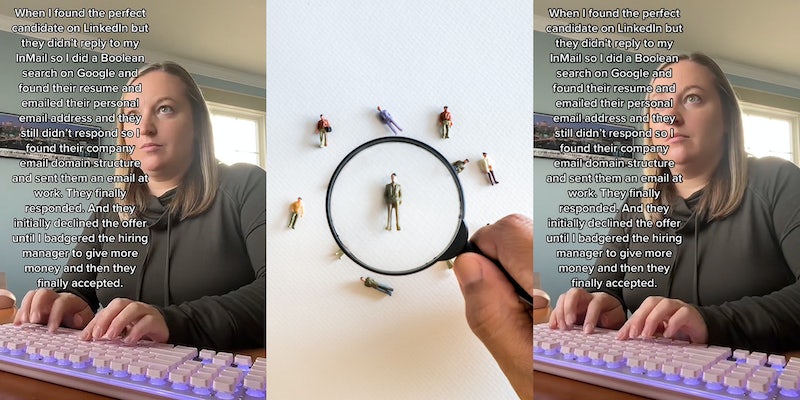 'I wouldn't react well to this.'

When working in recruitment, there are two types of candidates for jobs. Active candidates, of course, are the people who actively apply for jobs, while passive candidates are the people recruiters headhunt because, while being a good fit for the role in question, they have not applied or shown interest in the job.

One recruiter, who posts under the TikTok handle @nikkijazzzz, put her own spin on the recent TikTok trend involving Taylor Swift’s “Mastermind.” Matching the lyrics and themes of the song, a lot of TikTokers are using the sound to reveal the ways they “masterminded” their relationships, such as “coincidentally” showing up at their place of work.

However, in a video that amassed over 200,000 views, @nikkijazzzz posted her own version of the trend, as she captioned the video, “This trend but make it recruiter.”

While the lyrics of the viral sound played in the background, @nikkijazzzz joked about the ways she’d get in touch with a passive candidate, writing, “When I found the perfect candidate on LinkedIn but they didn’t reply to my InMail so I did a Boolean search on Google and found their resume and emailed their personal email address and they still didn’t respond so I found their company email domain structure and sent them an email at work. They finally responded. They initially declined the offer until I badgered the hiring manager to give them more money and then they accepted.”

A number of commenters were sceptical about the idea of recruiters contacting people via work emails, with one asking, “Isn’t that stalking?” Another added, “I wouldn’t react well to this.”

“If someone contacted me at current work I would think they are very desperate and wouldn’t have an interest in doing the job of a few people,” a further comment read.

In response to another commenter, who said emailing someone at their current work address is “over the line,” the TikToker made it clear that this was meant as satire, although she noted, “people used to call in for jobs for people. I don’t disagree, it’s awkward.”

She later added in response to another comment, “I will say there are some recruiters who have no bounds for the right person.” Judging by the experiences of other commenters, it looks like @nikkijazzzz was right, as one user noted how a recruiter tracked down their address and even sent them cookies.

The TikToker didn’t immediately respond to the Daily Dot’s request for comment via email.