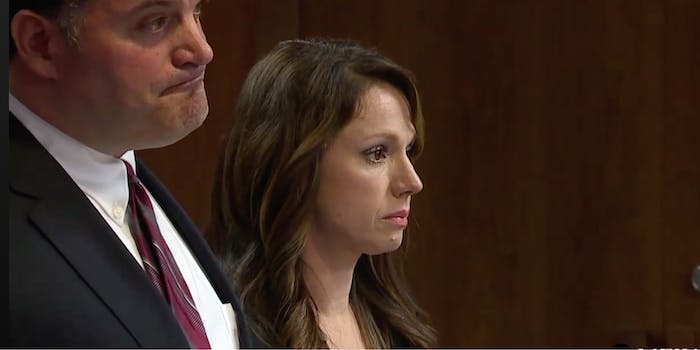 She'd rather go to jail than back down from her beliefs.

One Detroit mother is facing jail time for refusing to vaccinate her son, something she said she’d rather do than back down from her beliefs.

According to ABC News, Rebecca Bredow was sentenced to seven days in jail on Wednesday for contempt of court after Bredow said she wouldn’t comply with a court order to let her son receive his missing vaccines within one week.

Appearing at her hearing at the Oakland County Circuit Court, Bredow told Judge Karen McDonald that she took full responsibility for her actions, but that vaccinations go against her beliefs.

Bredow and her ex-husband Jason Horne share custody of their 9-year-old son, and originally agreed to space out his vaccines, as she was concerned over the grouping of shots. However, she and Horne are reportedly in a legal dispute regarding several issues, one of them being their son’s vaccinations. Despite their previous arrangement, Horne told the courts that he wants his son to receive his vaccinations on time.

So when the court ordered Bredow to update her son’s vaccines according to the schedule recommended by the American Academy of Pediatrics and gave her one week to reply, she refused. However, court documents show she was first asked to immunize her son in November 2016.

“Now I have four-and-a-half business days…to fully vaccinate, they want me to bring him up to the fullest extent medically allowed, which would be up to eight vaccines, in one dose,” Bredow previously told ABC News in an interview. “I would rather go to jail for standing up for what I believe in than vaccinating my child.”

While Bredow’s serving jail time, her ex-husband will be taking care of their son. She’s anticipated to be back in court next week.

“God forbid if he were to be injured by a vaccine,” she said. “I would have to take care of him.” She also said vaccinating a child is a parent’s “personal choice.”