Awful people are dressing up as Ray Rice for Halloween

Janay Rice had the only response you need to hear.

Halloween is less than a week away, and bad decisions are already being made! More specifically, people are already dressing up as Ray Rice.

As Uproxx points out, there’s this guy, who attended a Halloween party dressed as the Baltimore Ravens player who punched out his then-fiancée Janay Rice in an elevator, complete with a blowup doll that he’s dragging around by its hair. Because abuse is a punchline. 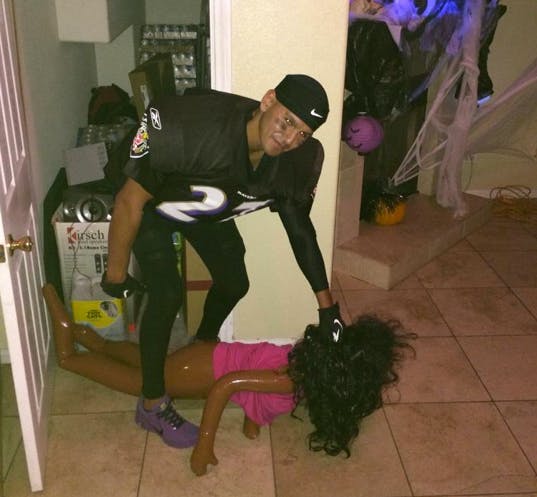 It’s so funny, you can dress your child up as a known abuser, too.

Oh great. Who’s got large # for Child Services? RT @tchopstl @mdlamaster And also this one. pic.twitter.com/AkUoLTlr6l

And then there’s this guy’s parents, who took it next level with a blackface/black eye combo.

And there will likely be many more, because ignorance multiplies quickly. The defenses of these costumes will likely consist of “It’s just a joke!” and “It’s just a costume, lighten up!” That way, the people dressed up as known abusers can absolve themselves of any guilt or responsibility. But those people are still equating the abuse of women with a joke.

For some reason, AFI singer Davey Havok weighed in on this issue in a TMZ video, and suggested that this costume could be “saved” if women wore it and took the “power” back. I dunno. How about nobody wears it?

.@TMZ it’s sad, that my suffering amuses others

Lest you think adults and children dressing as Ray Rice is the most offensive costume this year, a “sexy Ebola nurse” costume also exists.