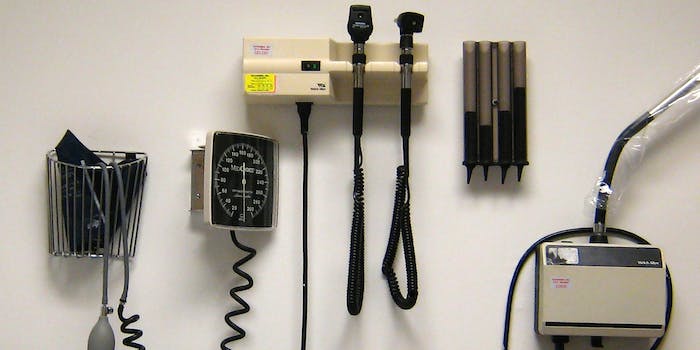 Rape victims are now having to crowdfund hospital bills

Victims are getting billed, even though it's illegal for hospitals to do so.

The request on the GoFundMe crowdfunding page by “Ann On” is simple and heartbreaking: “I was attacked over a year ago and today I got a hospital bill for my emergency room visit. I’m not financially able to afford the bill. I would really appreciate any help I could get.” 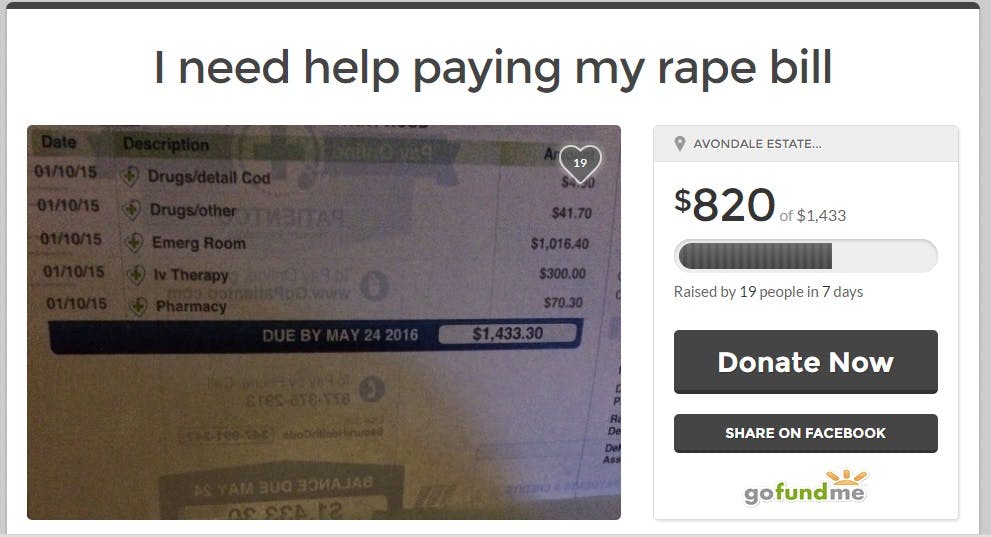 Daily Dot contacted the woman, who did not immediately return requests for comment. However, someone who tweeted a request to donate and identified herself as a friend of the victim, told the Daily Dot, “She called me from the ER when it happened and my heart broke for her then. Getting this bill just adds insult to injury. I shared and donated to help make the process easier for her.”

Rape victims are often encouraged to go to the emergency room for a rape kit and examination, which can lead to bills in the tens of thousands. And even though federal law prohibits hospitals from billing rape victims for their examinations, Sarah Layden, director of advocacy services at the Chicago-based nonprofit Rape Victim Advocates, told the Chicago Tribune last year that many hospitals still send patients the bill. (A law went into effect in Illinois in January that requires hospitals to let patients know they won’t be billed for rape kits, and fines hospitals $500 for breaking that law.)

Even if hospitals adhere to such mandates, the federal law doesn’t cover all expenses. Rape victims may still end up paying for treatments of injuries sustained from the rape, plus emergency contraception and medications to prevent or treat HIV infections and other STIs, according to NPR.

So it’s not surprising that “Ann On” isn’t alone in crowdfunding medical expenses associated with her rape.

After Tilisha Thomas was stabbed while fighting off a rapist in August of last year, she turned to GoFund Me and raised $12,165 toward her recovery. And after being raped in the alley behind her house, Tammers Benson is trying to raise money for medical bills and the cost of moving. And after sustaining rape-induced injuries, Ember Remliel has raised $8,000 toward paying off her medical bills.

Remliel told the Daily Dot in an email that her injuries from the rape required surgery, and since she didn’t have health insurance, the total cost was $22,000.

She wrote, “I set my page up after having paid the first $11K, and so I set my goal to $11K. After receiving some judgmental, accusatory, and even mocking emails in response to it, from friends and strangers alike, I lowered the goal to $8K. So, I still have about $3K left to take care of.”

And the money, Remliel adds, was instrumental to her survival. “Every dollar donated to my campaign meant that I was going to survive. I didn’t even consider crowdfunding until about 18 months after I was raped. When I got my first bill, I was desperate to privately set the whole incident behind me, as quickly as possible, so I opened two lines of credit and started working overtime (between 80 and 90 hours a week). The donations meant I could cut back on my work hours and focus on emotional and social healing. I was able to afford psychotherapy.”

Not only was the money instrumental, but so was the online support she received as a result of her crowdfunding efforts. “I live in a small town and I continued to see my rapist on a regular basis; at the same time, I had this incredible (and often anonymous) support system online, to advocate for me financially,” wrote Remliel.

“They simultaneously validated that my nightmare was real and actively supported my dream for peace and holistic recovery,” she continued. “I felt humbled, constantly confused, and shocked that anyone even cared. I ultimately wished I had opened up about it and asked for help sooner.”