Emma Sulkowicz became renowned for carrying her mattress to protest campus sexual assault. What she didn't expect were all the posters calling her a liar.

Columbia University art student Emma Sulkowicz graduated yesterday at an outdoor ceremony on campus. As the culmination of her senior art thesis, “Carry That Weight,” Sulkowicz brought her dorm room mattress onstage with her to rounds of applause.

The mattress is the same model as the one Sulkowicz says she was raped on in 2012 in her dorm room. The student she claims attacked her, Paul Nungesser, was cleared of wrongdoing in a school investigation and continues to maintain that he didn’t rape her.

But Sulkowicz, who is one of 23 Columbia students named in a lawsuit alleging that the university mishandles sexual assault cases, decided she would carry a mattress everywhere on campus until graduation—or until Nungesser was removed from campus. Nungesser also sued the school in a separate claim alleging damage to his reputation. Both students graduated yesterday in the same ceremony.

The day after graduation, posters appeared en masse in the Morningside Heights neighborhood where the school is located. The nearly life-sized posters featured a photo of Sulkowicz posing with the mattress, with the words “Pretty Little Liar” stamped across them. Other posters displayed a photo of Girls actress Lena Dunham, with the words “Big Fat Liar” running across the image. 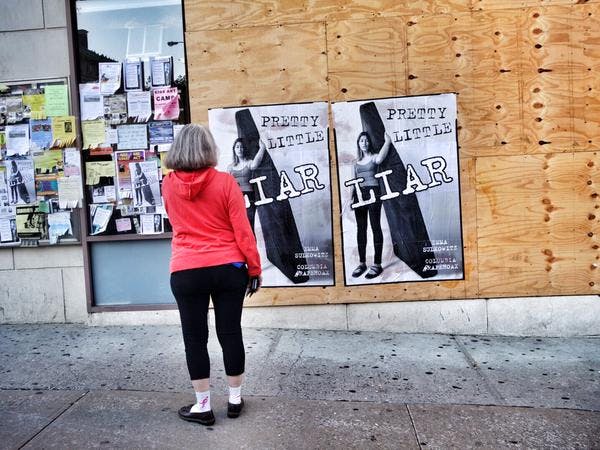 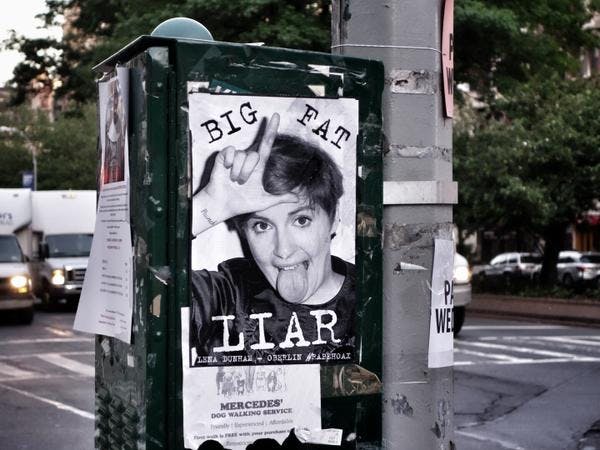 Someone behind the Twitter account @FakeRape took responsibility for the posters, declaring the paste-ups to be part of an extended art project.

One of the photos circulating online showed passerby tearing down the posters on the street.

The Daily Dot tweeted a request at the account asking for the identities of the people behind the posters, but received no reply.

Jezebel’s Anna Merlan noted that the posters were similar in style to those of right-wing street artist Sabo, who has not yet taken credit for the project. But men’s rights activist Chuck C. Johnson had previously tweeted that he was fundraising for “something big” to coincide with Sulkowicz’s commencement.

Hmm, I wonder who's behind the harassment stunt at @Columbia today http://t.co/ww6II2zaTV @Jezebel @annamerlan pic.twitter.com/1vNFgiC4eZ

Johnson denied Sabo’s involvement via Twitter, but not necessarily his own. He merely stated that he wasn’t in New York at the time the posters went up.

This story will be updated as more information comes to light.