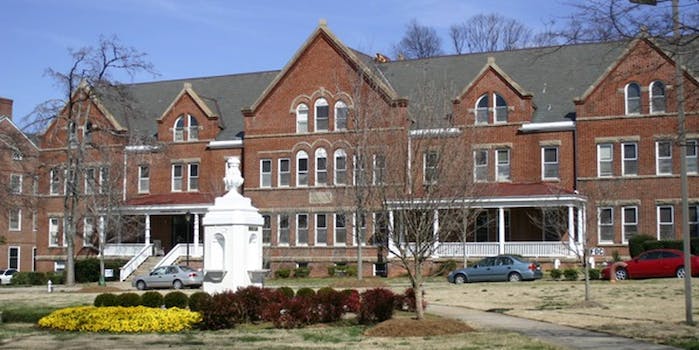 Morehouse and Spelman colleges urge people to come forward with any information on the attack.

On May 2, an anonymous student began posting on Twitter using the handle @RapedAtSpelman.

This is my freshmen year at Spelman and my last year because I decided to leave after what happened to me.

The student then described going to a party and being raped in the bathroom by four Morehouse students.

The student tweeted that she reported her rape but that when she followed up about her claims with the dean of students, she was told to be quiet and give the Morehouse students a pass.

drinking under age. The Dean also said that Spelman & Morehouse are brother & sister so I should give them a pass. I never felt so worthless

A source at Morehouse college confirmed to the Daily Dot that both colleges have launched a joint investigation into the allegations, but said that they have nothing to go on. Neither college, the source said, has received an incident report, rape kit, or Title IX complaint. Spelman did not return any emails or phone calls from the Daily Dot requesting more information.

The Atlanta Journal-Constitution reported Spelman College President President Mary Schmidt Campbell was committed to investigating the claims and offered sympathy to the victim, noting, “our hearts go out to you… Please identify yourself to me, so that I may offer you my full support and assistance.”

A similar statement by Morehouse President John Silvanus Wilson Jr. noted that he was “troubled” by the report. He said, “The information anonymously shared on Twitter was our very first indication of this incident. Now that we are aware of these allegations, we are determined to pursue the investigation to the fullest extent possible.”

The incident sparked outrage on Twitter. Students at Spelman launched a protest on May 3, assembling on the college lawn to raise awareness for the issue.

Other people used the hashtags #RapedAtSpelman and #RapedAtMorehouse to urge action by the colleges and to bring justice to the victim.

This student isn’t the first to anonymously protest how her school treated her rape. A student at Northwestern University launched a similar protest on campus last week, putting herself in a box with a sign that declared, “I was raped on campus. Now, I’m the one who has to leave.”

The Department of Justice estimates that over 80 percent of campus sexual assaults go unreported, often because victims fear reprisal. That’s likely one of the reasons this alleged victim has remained hidden, tweeting:

Its sad that I have to create a page to express myself rather than tweeting from my real account because AUC students blame & bash victims.