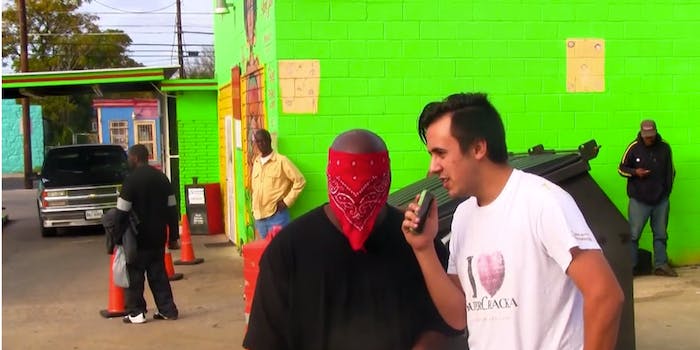 This is uncomfortable to watch. Not because of what they're holding, but because he's so open about mocking them.

If you egg on a YouTube prankster, chances are he’ll try and prove you wrong.

It’s uncomfortable to watch. Not because of the sex toy, but because Costello is pretty open about mocking his subjects.

Let’s go through it, shall we?

The lone female subject gets a special slow-motion replay because of her “hilarious” regional accent.

The comments about “that hood rat chick” are about what we’ve come to expect from any YouTube video featuring women, whether she’s a science reporter or a pick-up artist’s target.

Costello isn’t the first to exploit women and minorities for lulz on the Internet, but with his latest antics hitting the front page of Reddit, he’s sure got a lot of visibility.