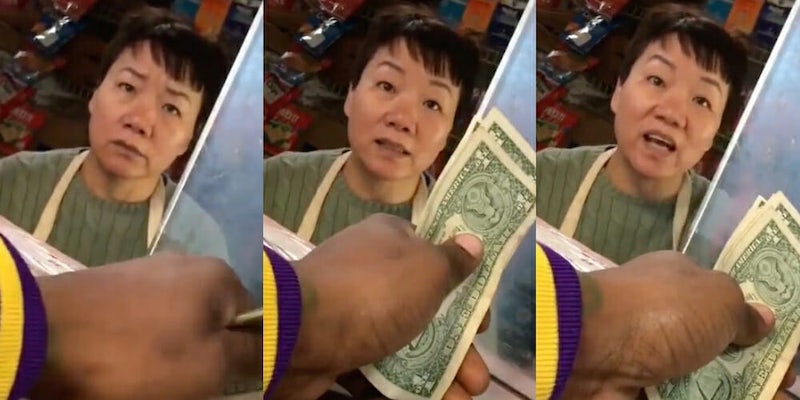 These videos of harassment are immensely wrong.

Despite whatever racist stories your bigoted schoolmate’s told you about Asian people, they don’t make a habit out of eating cats (or dogs, for that matter). Asian-Americans do not eat house pets, cats included. Even Asian cultures that historically ate cat do not eat cats, or are drastically cutting back, both because of cultural practice and laws against the consumption of such animals.

And yet, that hasn’t stopped this racist stereotype from following two Asian store owners who were harassed by some prankster who thought it a good idea to ask for “fried cat.”

A clip of the racist prank went viral over the weekend after being shared on Twitter by user @Maxx_kee, showing a Black man asking an Asian woman if she serves “fried cat.” The man tells the woman, running what appears to be a convenience shop, that the man next door told him that she sells fried cat. The man continues to say the phrase “cat fry” multiple times that the woman emphatically denies doing so, saying that the idea is “crazy” as the man recording the video says “meow.”

“If I’m lying, I’m frying, like the cat I want,” the man in the video says, with the woman threatening to call the police. The video, posted on Friday, Nov. 16, has since received nearly 8 million views, with nearly 40,000 likes on Twitter.

Another video, shared by the Instagram account @zone_15_thug_x2, appears to show a prequel to the video with the Asian woman. In the clip, an Asian man is asked by the man in the first video if he serves fried cat. “Oh, not here, next door,” the man says with a flat look on his face, clearly unamused at the racist assertion.

According to food writer Soleil Ho, while some Asian countries do consider food such as dog meat to be a delicacy, the stereotype of Asians eating dogs or cats is so damaging that any amount of acknowledgment is pushed deep down, and, when inevitably asked by an offending stranger, is never conceded in the interest of protecting the collective Asian identity.

And it’s understandable as to why any Asian person asked this question wouldn’t want to explore the nuances of its answers. At the 1904 World’s Fair, Ho used as an example, the preparation of dog meat was used to gawk at “primitive” Filipinos, while as recently as 2016, Ho reported, Senate candidates were evoking images of Vietnamese refugees “harvesting” house pets as an anti-immigrant argument. The eating of dog and cat meat has been codified into the collective identity of Asians that Americans generally have.

Despite all the other more present and interesting aspects of Asian culture, this has become the aspect that sticks, because it allows people who aren’t of that culture to “other” Asians and Asian-Americans, and look down upon them for doing something considered to be so inhumane and classless (despite the fact that, again, Asians generally don’t do this).

Across Twitter and Reddit, people have admonished the videos, calling out the racist stereotyping and harassment of the woman, who’s only trying to do her job when she’s accosted by this person.

“People actually find this funny??? The lady was obviously upset, so how is it a ‘joke’? Didn’t know that jokes in 2018 were about racial stereotypes and making people feel bad,” one person wrote on the subreddit r/asianamerican.

“I saw this on IG last night. I was absolutely furious,” another person commented. “Leave the ajumma alone, fucking prick. She’s just trying to work and you need to bring that racist garbage.”

i will truly never understand how people find racism funny in any context https://t.co/pk4cf41j33

This is lame, offensive and unfunny. The woman is clearly on the verge of tears thinking the reputation of her business is on the line.

Do better. If your "comedy" has to come at the expense of other people's humanity, you aren't funny. https://t.co/TQG8wS9quf

It’s unclear just where the videos comes from, but the one including the Asian woman appears to be copied from the Instagram account @cool_ant, which has posted an apology for sharing the videos in the first place. Both videos, as seen on the Instagram account originally, have since been deleted. (The account owners for @cool_ant and @zone_15_thug_x2 did not return the Daily Dot’s request for comment.)

“I recently shared content that was both offensive and insensitive. I am deeply and genuinely sorry to everyone that I offended. My actions lacked compassion and promoted racial stereotypes which is completely unacceptable,” the account owner posted.

On the subreddit r/asianamerican, posters shared a different apology originally shared by the Instagram account, appearing to take responsibility for the creation of the video, but not apologizing for the promotion of racist stereotypes nor the harassment of the store owner involved.

“Was she about to cry? No! I sat in that store for about five minutes after the video waiting for my real food that I ordered,” the account owner wrote. “Do that make it right? No! But if that lady would have shown any behavior that was out of the norm or that wasn’t expected I would have never followed through.”

The man in the videos is most definitely racially targeting Asian people to harass them with an outdated, offensive stereotype. But are these videos racist? Many of the commenters across the Instagram videos and posts made on Twitter have argued that they aren’t, because the man playing a prank on the business owners is Black, and therefore cannot be racist against other people of color.

Others have argued that Asian people are discriminatory of Black people, therefore justifying the man’s harassment of the Asian business owners.

Racism itself is a systemic inequality that leverages power to the people who discriminate against others because of their race. In that case, the man harassing the Asian restaurant owners, who is Black, isn’t necessarily being racist. He’s not necessarily experiencing systemic benefits from these racist stereotypes against Asian people at large. But he’s being offensive, bigoted, and purposely trying to harm these two people by using an inaccurate racist stereotype against them.

Without a doubt, anti-Black racism exhibited by Asian people must be addressed and called out for contributing to harmful stereotypes about Black people—as should discriminatory behavior toward Asians and Asian Americans that make it more acceptable for the rest of the country to treat Asians as “other,” and to shame and harass them for these inaccurate stereotypes.

People of color cannot afford to not support one another, and that rings true no matter which groups of people are experiencing racist behavior.