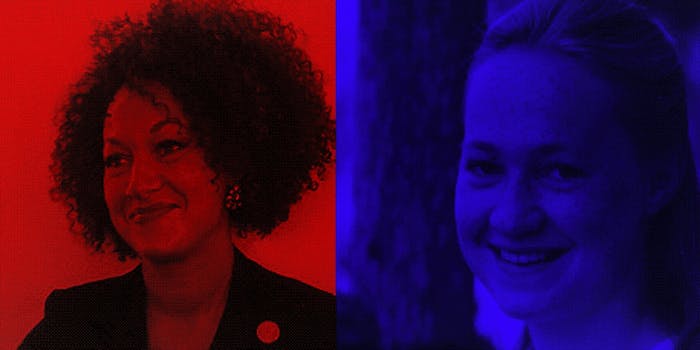 Here’s why every Rachel Dolezal-Caitlyn Jenner comparison is wrong

Some people in the black community are actually defending Dolezal's 'transracial' identity.

Yesterday news broke online that Rachel Dolezal, president of the Spokane, Washington chapter of the National Association for the Advancement of Colored People (NAACP), has allegedly been pretending to be black for years. Dolezal’s parents “outed” her to reporters in her native Idaho, where the family still lives, providing them with damning childhood photos that show a young girl with pale, European skin and silky blond hair. 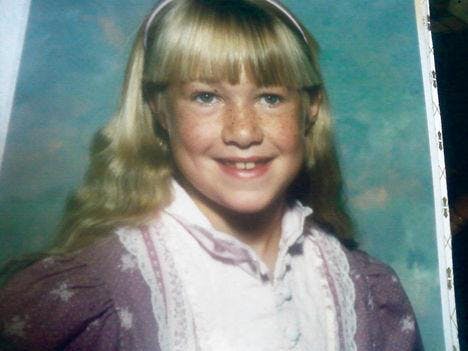 But the most shocking thing about the Dolezal revelations isn’t that a civil rights leader “passed” for years as a different race; it’s the way some black people online are defending her right to do so—even when Dolezal herself appears unable to answer questions about her racial background.

During an era of outspoken protests against racial profiling in law enforcement, discussions of cultural appropriation that criticize white female pop artists like Iggy Azalea and Miley Cyrus, and horror at actors cast to play people of color in movies, it comes as quite a surprise that there are black people who think Rachel Dolezal should be able to claim blackness for herself.

Some black Twitter users compared Dolezal’s portraying herself as a black woman to Caitlyn Jenner‘s gender transition after living for years in the public eye as a man named Bruce.

If #BruceJenner can be #CaitlynJenner clearly #RachelDolezal can be a black woman! Go ahead sister!!!

Give me one good reason why #RachelDolezal is a privileged creep but #CaitlynJenner is a hero. Just one.

If Bruce Jenner is a woman, then #RachelDolezal is black. Rachel is black if that's her "true self".

If Bruce Jenner can be Caitlyn, #RachelDolezal can be who/whatever she wants… I

Others said that Dolezal, who graduated from historically black Howard University and is married to a black man, “earned” her black identity through her years of civil rights work with the NAACP and as a professor of black studies at Eastern Washington University, where she has taught such courses as ‘The Black Woman’s Struggle’ and given lectures on ‘Ferguson and Race Relations in America.’

That lady made a difference in the commUnity. I don't give a fuck if she was claiming to be turquoise. She tried to help. Move around

Some tweeters even jokingly called for a swap, saying they would prefer to claim Dolezal as black rather than Cosby Show alum Raven Symone, who was criticized early this year after claiming she didn’t identify as African-American. Others offered to trade out conservative Fox anchor Stacey Dash in return for Dolezal.

The Black Delegation would like to trade Rachel Dolezal for Raven Symone. You can fool every1 for that long…welcome to the team

RACE IS NOT REAL. AINT NO SUCH THING AS BLACK OR WHITE OR YELLOW OR BROWN. IT'S A SOCIAL CONSTRUCT, NOT A GENETIC TRAIT.

But while some black Twitter users earnestly spoke out against the very concept of race, saying that it’s a construct and shouldn’t prevent someone from being “transracial,” others slammed that theory with aplomb. Those against Dolezal said that while identifying with a different race might be one thing, there’s no justification for years of lying and pretending to be someone you are not. Dolezal is accused of using a non-relative to pose as her black father, of hiding her European family roots, and of marking “African-American” on job application forms even though she is not.

Words like #transracial are being created out of thin air to justify the deception of #RachelDolezal. She is a disrespectful liar.

Writer Rafi D’Angelo posted an explainer on Tumblr debunking the concept of transraciality. D’Angelo pointed out that transracial is not an identity term (in the dictionary, it refers mostly to adoption and mixed-race families), but he also dug into the political history and strange nature of white people’s insecurity around race and whiteness.

Rachel is not transracial, mostly because that doesn’t exist, but also because she herself probably wouldn’t claim it.  She doesn’t “feel” like a Black person on the inside.  She’s using Blackness as an easy way to promote her own (largely well-intentioned) agenda.  Those of us who are upset with her aren’t mad because she’s white.  White allies are great.  White people have always been involved with the NAACP.  They were there when the organization was founded.  We’re upset because she put on a caricature of the people she supposedly supports because it was easier to do that than to be a much-needed white voice in support of our community.  It was too hard for her to be white and have white people shun her because of her affinity for Blackness, so she pretended to be Black instead.  Because of how race operates and because we all still follow the one-drop rule, the Black community accepted her with open arms since she appeared to have some Black ancestry somewhere.  White people do not accept you as a fellow white person for appearing to have white ancestry.   We HAVE to be Black, all day everyday and it makes us stronger people because of it.  The fact that she couldn’t handle being a white ally, couldn’t handle being white with an association to Blackness, and used persecution of Blackness as an attention-seeking “look how oppressed I am” mechanism by exaggerating and trivializing very real threats against our people is disgusting.

D’Angelo pointed out what many people have been saying online: race isn’t a choice most black people get to make. Blackness is not interchangeable; it’s not something that can be swapped out even if someone wanted to become white. The legal history of race and blackness in the U.S. is centered on definition, on how many “drops” of African blood locked a person out of the privileges of whiteness. As comedian Amanda Seales pointed on in a tweet, a black person historically could get in serious trouble if they were discovered to be passing for white.

The one-drop rule in U.S. law was so extreme that mixed-race children were automatically classified as whichever race was perceived as “subordinate,” a process known as hypodescent. Under the rules of hypodescent and one-drop, a person with even a single African ancestor was legally classified as black. The fear of black assimilation, and of black people passing as white, was so strong that Virginia’s 1924 Racial Integrity Act demanded that even Native American families with African ancestry be re-classified as legally black—all because one lawmaker was convinced that Native Americans, many of whom had intermarried with African slaves, were able to pass as white. In Virginia, something called the Pocahontas Exception allowed whites to claim Native American ancestry—but never the other way around.

Given the history of rules around who was allowed to “pass” and who wasn’t, it’s especially angering to many people that a white person would claim to be black. After all, good luck trying to pass as white if you have dark skin. These Twitter users joked sarcastically about the impossibility of black people trying to identify as white, thus gaining access to white privilege.

I'm actually a white man. I was born with the wrong skin. Can I get some access and privilege? #transracial

Some Twitter users seemed outright disturbed by the idea of black Dolezal supporters, conflating them with abuse victims that over-identify with their abusers, a la Stockholm Syndrome.

I say this with all sincerity….some of yall behave as if you have battered wife syndrome when it comes to white folks

A lot of people online were horrified at the comparisons between Rachel Dolezal and Caitlyn Jenner, pointing out that Jenner didn’t lie about being a woman or try to claim a completely different ancestry and family. There were also concerns that the conflation was ultimately going to hurt the progressive strides that have recently been made in highlighting transgender issues and discrimination.

#RachelDolezal was being deliberately deceptive about her race for professional gain. Where's the link to Caitlyn Jenner here?!

But it was Twitter user Nikki Lynette that put it most succinctly, placing the entire argument about “transraciality” in a family-friendly context.