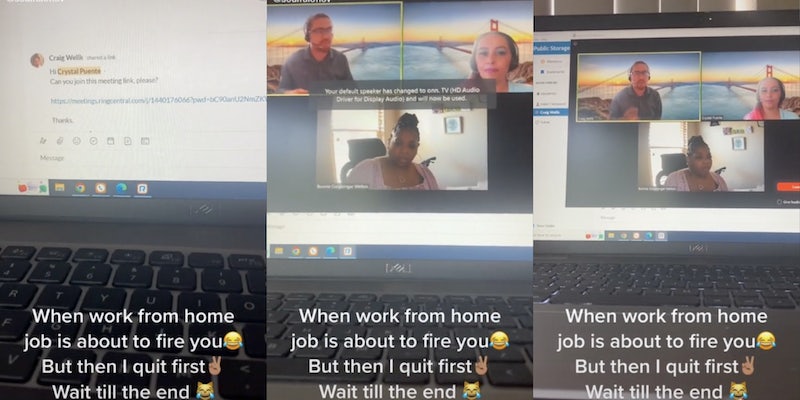 ‘One door closes, another opens’: Remote worker quits during Zoom call before her boss can fire her, sparking debate

'Your pride and ego just cost you unemployment.'

A woman on TikTok says she was about to get fired on Zoom, so she quit her job before her supervisor could make it official.

Crystal Puente (@soulfuloflov) posted the 37-second video to TikTok on Sept. 30 with a text overlay that reads, “When work from home job is about to fire you. But then I quit first. Wait till the end.”

Puente joins a growing number of workers who have quit their jobs, although few have managed to do so while they were about to be fired by their supervisor on a Zoom call. In the video, the former Public Storage employee points the camera to her computer screen which shows a message from her supervisor asking her to join a virtual meeting. The clip then cuts to the middle of the meeting in which her supervisor can be heard speaking mid-sentence.

“I know you had a management counseling with Jeannette on August 18th discussing sales performance, quality assurance,” Craig is heard saying on the call. The supervisor also claims that Puente has “had numerous subsequent coaching[s] with Gary Klein since then.”

“But at this point, we just have not seen any sustained improvement or progress in terms of that performance level still averaging like the low 60% range,” Craig continues, gearing up to seemingly fire the employee. “So at this point, we’ve determined it’s just not a good fit. So we’re gonna…”

It’s right then that Puente takes matters into her own hands and appears to quit before her supervisor can tell her she’s been fired. She ends the call abruptly and just says, “Goodbye, See ya” to the empty screen. In the comments section, Puente doubles down on her decision to leave, writing, “One door closes another opens.”

As of Oct. 3, the video has gone semi-viral with 65,500 views and viewers commenting on Puente’s power move.

Many viewers were dying to know what the company’s reaction was to their employee cutting them off mid-way through a firing.

“Did they call you back after,” a user asked, to which Puente responded, “Yes a lot of times. They did not get to Finnish.”

“They be living for those conversations. I refuse to listen,” said another, referring to their belief that higher-ups enjoy firing people.

However, many viewers disagreed with Puente’s hasty decision. They argue that instead of quitting, she should have let her supervisor fire her over Zoom so she could collect unemployment benefits and possibly get severance from the company.

“This was a very childish way to end a conversation,” one viewer chastised. “Let them talk act like u are listening and get that severance package and PTO paid.”

“By voluntarily quitting [you’re] limiting yourself from getting unemployment benefits therefore you’re doing them a favor. Now they don’t have to pay you,” another explained.

“Your pride and ego just cost you unemployment,” a third pointed out.

One person did argue that Puente did not actually say the words out loud.

“Too bad she didn’t say the words “I quit” all she did was end the meeting so yes she can apply for unemployment,” they said.

Another clarified that “Hanging up on the meeting is not quitting and it would not be considered a quit because it was not your choice to leave the job.”

But many felt that the overall satisfaction of quitting in the face of being fired was worth the lack of severance or unemployment benefits. One person even felt Puente stayed on the call too long, saying, “I feel like you left the meeting too late lol after he said no improvement I would’ve been like buh byaaa.” Another just said, “Alexa play “I did it my way” by Frank Sinatra.”

Update 1:54pm CT, Oct. 4: Puente told the Daily Dot she believes she didn’t quit but was fired. “As you can hear in the conversation he told me that it was not a good fit,” she said. “So there was no reason to stay on the Zoom call.”

“I was in the top group for sales and the number of calls that I was getting per month,” she said before questioning why she would “quit a job [she] was doing good at.”

She said her video demonstrates how it’s important to stand “up for yourself” and that she initially only took the job to “fuel” her business, LalaCityLashes.