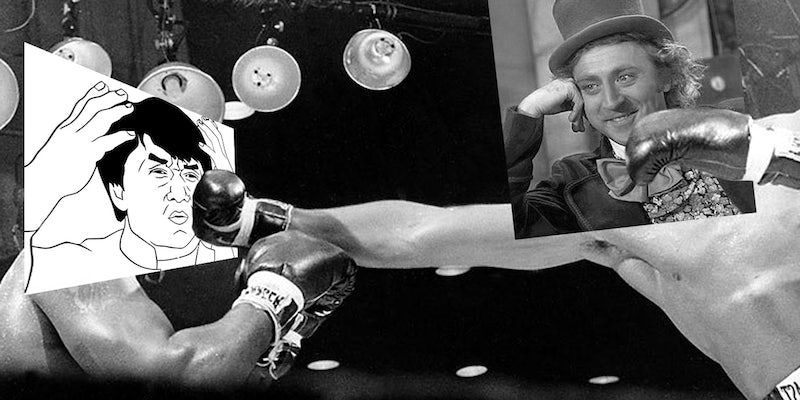 Two meme sites are accusing one another of manipulating Reddit users—with a popular browser extension caught in the middle—but what's really going on here?

The founder of Quickmeme, the popular image-captioning website, has finally opened his mouth regarding the Reddit ban of his site—and he’s put his foot firmly in it.

In an email sent to the Daily Dot, Wayne Miltz defended his site against the ban, which has rocked Reddit‘s meme community.

“There has been no malicious voting from quickmeme,” Miltz said. “We now believe the opposite has been used against us to maliciously push quickmeme out along with the [Reddit] user yourfriendshateyou providing false information and making false claims of which has happened in the past as well saying quickmeme host viruses and installs malware and the founders of quickmeme hate Reddit.”

Late Saturday evening, Quickmeme was banned across Reddit for allegedly using bots to upvote posts linking to its site. The more votes a post receives, the higher probability it has of reaching Reddit’s front page. And with more than 71 million monthly visitors, a front page placement typically translates into a windfall of Web traffic.

What the ban means for everyday redditors is that any link from Quickmeme’s domain is prohibited, and this message appears when trying to submit:

In his email to the Daily Dot, Miltz alleged an elaborate conspiracy orchestrated by the creators of Reddit Enhancement Suite (RES), a popular Reddit browser plugin, and the meme-generating site livememe.com—a Quickmeme competitor—to bring down Quickmeme.

Miltz claimed that Livememe was owned and operated by RES. He also believed that RES was using a server called resme.me and a script provided by Github user hypah to force users to submit images via Livememe instead of Quickmeme, thus syphoning off some of Quickmeme’s traffic.

Miltz did not provide any evidence of link manipulation or vote rigging by RES after multiple requests, and he directed the Daily Dot to existing Quickmeme links that no longer exhibited the supposed manipulation. In a followup email to the Daily Dot, Miltz admitted that the alleged vote rigging on the part of RES was his “opinion.”

About 24 hours after Miltz explained Reddit Enhancement Suite’s alleged anti-Quickmeme plot to the Daily Dot, a similar explanation was posted on the company’s blog. Less than two hours later, that blog post had been deleted, following a message RES creator Steve Sobel sent privately to Quickmeme.

At least some of Miltz’s claims are untrue. Livememe is not owned by RES. It is owned by and registered to a James Buehring of Chicago.

“RES is not at all associated with livememe.com nor quickmeme, nor ‘resme.me,’ either,” Sobel told the Daily Dot. “If resme.me performed any linkjacking, I’m certainly not aware of it and was never made aware of it by anyone who suspected it.”

But hypah, the coder who got resme.me added to RES, does have ties to Livememe. According to whois records, hypah is Steven Howse, the domain manager for autoshoop.com. Autoshoop is owned by Buehring’s company, JB Network LLC.

Hypah defended resme.me on Reddit Monday afternoon, stating he built it with “the simple goal of allowing RES users to easily create memes” and to “level the playing field for all meme sites.”

He also added that Livememe posts have been buried over the past year by “Quickmeme’s voting bots.”

Over the past year, I’ve struggled to help livememe get any attention. Whenever someone’s submission would do well, I’d gift them reddit gold, buy them a game on Steam, etc.; anything I could think of to try to get a supporter here and there.

Roughly seven months ago, Sobel corresponded with hypah on Github regarding some code hypah had created to make it easier for RES users to caption and submit images to r/adviceanimals, Reddit’s home for all things meme and one of the largest forums on the site with more than 2.6 million subscribers.

At first, Sobel was concerned about the fact that hypah’s code worked by redirecting users to his own service, resme.me.

“I’m definitely going to check this out and see how it works, but I’m a little nervous about relying on a third party service that is untested, etc,” Sobel commented on Github. “Clearly it seems your intentions are good – I just have to be careful with over 1 million users – especially their security, so I’ll need a little more time than normal to look at this code.”

Three months later, Sobel added hypah’s code to RES, even though hypah admitted on Github that “if my server were ever compromised, a malicious party could replace the redirect URL with something else.“

Sobel says that, as far as he knows, the captioning feature of RES has only been used to redirect to Quickmeme pages.

“If resme.me was later updated to do malicious stuff, that’d be 100 percent unbeknownst to me, and it would have nothing to do with RES other than RES being used (abused?) as a vehicle to send traffic to resme.me so that they could hatch their scheme,” Sobel said.

“Their scheme, however, is still only a bunch of allegations by the quickmeme.com owner and I have NO idea if any of it actually happened.”

If Sobel were to find evidence that RES were being exploited by Livememe, he explained on Reddit, he would pull Livememe support right away—”not that that really hurts them much, but it’s all I have the power to do.”