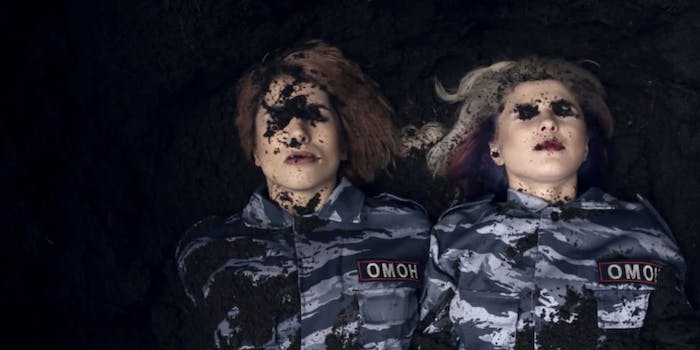 "I Can't Breathe" is exactly as horrifying as it sounds.

Pussy Riot’s first English-language song, “I Can’t Breathe,” is a tribute to Eric Garner, who uttered those words 11 times as he was fatally restrained by NYPD officers last year.

The music video for the stark, insidious track sends an unambiguous message: Nadya Tolokonnikova and Masha Alyokhina—two members of the mostly-anonymous band released from prison just over a year ago—wear Russian riot police uniforms and are slowly buried alive in dirt.

At the outset, a camera lingers over a pack of “Russian Spring” cigarettes, a real brand and, the video’s caption says, a reference to a term “used by those who are in love with Russia’s aggressive militant actions in Ukraine.” Eric Garner was allegedly selling loose cigarettes when confronted by police in July.

It won’t be the dance-floor single of the season, but it’s certainly food for thought. “Getting dark in New York City,” indeed.