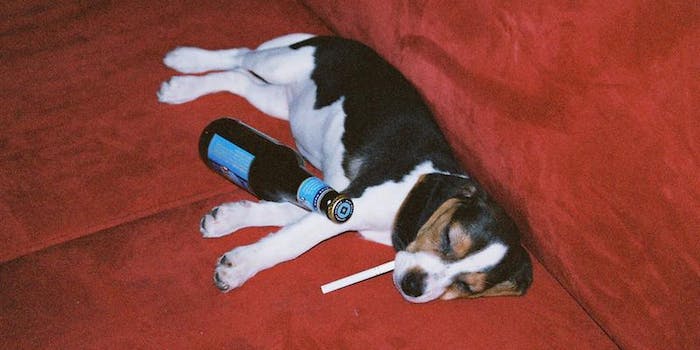 College kids really screwed the pooch and barked up the wrong tree making their dog a boozehound. Justice is a howling bitch.

What’s not funny at all? Making your dog drink a substance that is unequivocally bad for it and endangering its health because you think getting an animal all messed up like a frat boy is entertaining.

Two students at the State University of New York at Brockport were arrested on charges of torturing and injuring an animal after photos surfaced of a brown lab getting held up to do a beer bong. One of the students held up the dogs’ legs, while the other tweeted the image. The photo went viral, which tipped off police. The dog, a four-month-old puppy named Mya, is now being cared for by an animal shelter.

Did no one learn from the episode of The Simpsons when Homer gets Mojo the Monkey Helper and then allows the small animal to devolve into a lifestyle of alcoholism? Animals can’t party like humans!

Hopefully the students learn their lessons. “There are a lot of good kids at this school. Sometimes poor decisions are made. If they stop and asked themselves, is this the right thing to do? A lot of times a good decision are going to be made because they know what the right thing is to do is,” Lt. Mark Cuzzupoli of the Brockport Police Department told TWC News-Rochester. And it’s not known if the dog was actually drunk, so this may have just been a poorly thought-out photo staging spun out of control.

Is it ever OK to give your dog alcohol? Ordinarily we’d say no, but last week in Melbourne, Australia, medics at an Animal Rescue & Emergency clinic had to give a dog an entire liter of vodka in an extremely rare treatment for ethylene glycol poisoning. So in a few select cases, like when a dog ingests a fatal amount of anti-freeze and the only antidote is getting them crunk, it is OK, under proper supervision.

Otherwise, no booze for your hound.