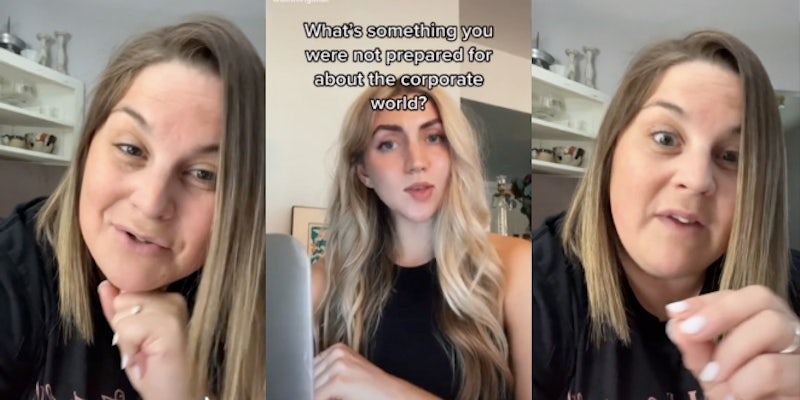 ‘Why would you even bother taking and using your PTO anyway?’: Worker says taking PTO is more work, sparking debate

'Girl, I don’t let work stress me. These jobs don’t care about us.'

If you’re a working person, you’ve likely experienced the dread that comes with requesting paid time off (PTO), and there’s a significant chance you’re not alone.

In a recent video, TikToker Kallai Plummer (@allthingskal) shared that the anxiety that comes with requesting PTO was one thing she was not prepared for in the corporate world.

“Because you know that when you come back, you’re going to have a shit ton of emails, people are going to need you because they can’t do their job when you’re gone,” Plummer said. “So why would you even bother taking and using your PTO anyway?”

Plummer said it’s likely people are forced to do one of two things: work while they’re taking PTO or be a “basket case the whole entire time and so your PTO time is ruined any.”

In the comments section, Plummer revealed that she had left the corporate world “and never looked back.”

“The amount of people who struggle with [PTO] is insane…Take your PTO and forget the rest!”

More than half of Americans, about 55%, do not use their full allotted paid time off, according to the U.S. Travel Association. In the U.S., it’s not necessarily a requirement that jobs offer paid time off, under the Fair Labor Standards Act, but PTO policies do vary across industries and the length at which an employee has worked at a particular job.

One person in the comments section argued the anxiety around PTO is why some people “quiet quit” their jobs to which Plummer replied, “Quiet quitting really is just a fancy term for doing the job you were hired for and nothing more. Should be the standard always.”

Others in the comments said they related to feeling guilty about taking PTO.

“I’m struggling with this right now. Just took two weeks off for my destination wedding and have worried almost every day about how behind I’ll be,” one commenter said.

On the other hand, some just reiterated that a job that doesn’t allow you to take time for yourself is not one worth having.

“Girl, I don’t let work stress me,” another commenter said. “It will get done when it gets done. I have enough stress outside of work lol. These jobs don’t care about us.”

The Daily Dot has reached out to Plummer via TikTok comment.

Update 12:19pm CT Sept. 26: Plummer told the Daily Dot that she hoped to validate viewers’ concerns with their PTO situations at work.

“The intention of this TikTok was to call out the toxicity in a ton of corporate cultures,” Plummer explained. “I want people to be seen and heard but most importantly validated that they aren’t crazy for thinking that their PTO situation is just as toxic as anyone else’s.”

She added that she plans to create more content encouraging workers to set their own boundaries.

“My hope with my following videos after this one is that they don’t do quiet quitting but they learn boundaries or how to either pave their own way,” she said. “My shift from corporate world to working with myself came from a lot of undoing of no longer looking over my shoulder or wondering if I was doing it right. When I had to believe that I am again paving my own way, and I can set my own boundaries. Entrepreneurship is hard but it is so worth it.”

The TikToker also noted that she is creating a course “for women looking to get rid of the disaster corporate has made them,” in addition to a podcast she hosts for her business.