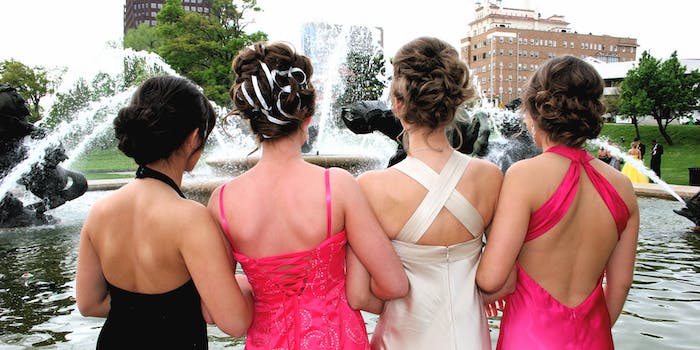 What, you kids can't just buy a nice corsage?

Here’s something that’ll make you thank the good Lord in heaven you’re no longer in high school: A group of juniors and senior boys at Corona del Mar High School in Newport Beach, Calif., have been reprimanded for hosting a “prom draft” and then documenting the process on social media.

What is a “prom draft,” you might ask? Basically, it’s exactly what it sounds like: an NFL-style “draft” for high school boys to select their female dates, many of whom are ranked solely based on their appearance. And we thought promposals were bad.

Although the draft has evidently been going on in the area for years, recently it caught the attention of school administrators when some of the first-round “draft results” were posted on Twitter, along with photos of girls with their names on the back of their jerseys. One of the tweets linked to a prom draft “rulebook.” Another contained the following announcement: “Many drafters on the prowl tomorrow for #freeagents so dress nice ladies.”

As you might expect, some female high school students harbored some minor objections to the tradition of being treated as chattel by their male peers in a public venue, and they’ve started voicing their objections to the draft, with the president of a feminist group in a neighboring high school calling it “insulting” and objectifying to women.

The complaints prompted Corona del Mar principal Kathy Scott to send an email to parents condemning the draft. “I am sure that the intention of this ‘draft’ is not to be harmful, but it may be. It is not OK for any student to be objectified or judged in any way,” Scott wrote.

Of course, as with the case when any offensive or outdated tradition is overturned, there’s been a backlash to the backlash against the draft. Surprisingly, it’s being led primarily by female draftees and their parents, who have written to the local newspaper in defense of the tradition.

What, you guys can’t just buy a nice corsage?