Professor wins the Internet by holding a student’s baby

A student's baby started crying. What Professor Sydney Engelberg did next will tickle you.

It’s pretty much a universally acknowledged fact that babies don’t have any place in the classroom. (They don’t have any place driving or smoking cigarettes, either, but that’s another story altogether.) But if you’re a parent who’s also a student, sometimes you might have no option but to bring your little one to class.

That’s the position that a student at Hebrew University in Israel recently found herself in. During an organizational behavior class, her baby began to cry, and when she left the room, professor Sydney Engelberg picked the child up to soothe him or her while he continued his lecture, like it wasn’t no big thing. Engelberg’s daughter Sarit Fishbaine posted a snapshot of her dad holding the baby on Facebook, and the photo has since gone viral. 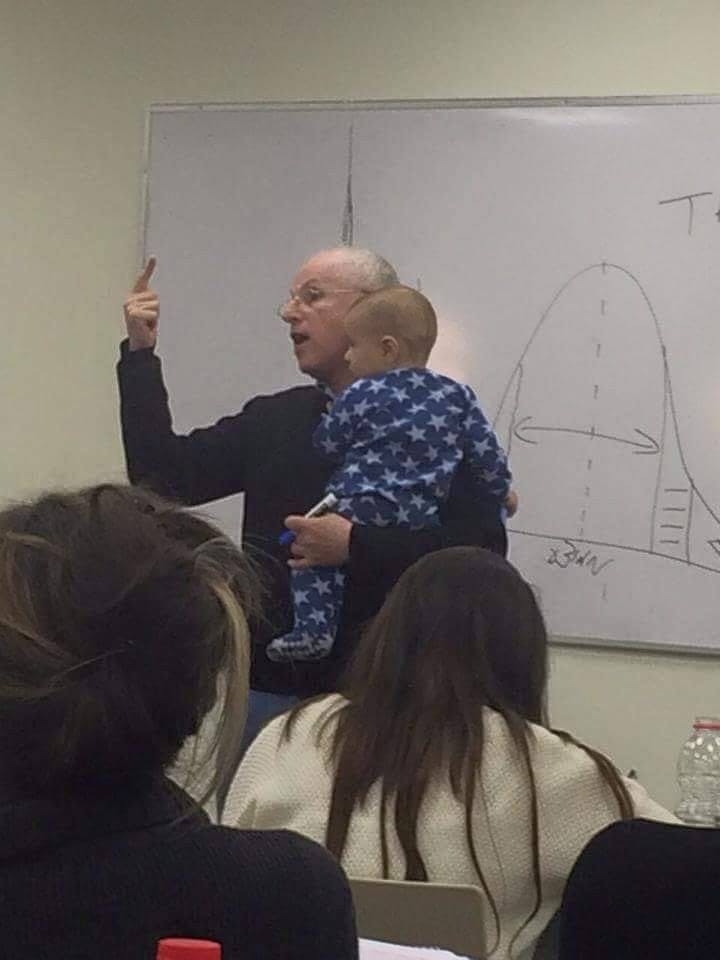 According to Facebook’s translation of Fishbaine’s post (which was written in Hebrew), Engelberg continued teaching and soothing the child as if nothing had happened. Apparently, this is a regular occurrence, as many of his students bring their kids to class and breastfeed them during lectures.

“That’s what I call ‘organizational behavior,’” Engelberg’s daughter wrote. “Show me another [class] run like that. Because my father is the best of the world.” Well, he certainly has the best upper body strength of most professors in the world, because holding a baby that age for an extended period of time is no small feat.

While the photo has touched a nerve with parents, garnering more than 50,000 likes on Facebook, apparently it’s not super uncommon for students in Israel to bring their babies to class.

“Israel is a very familial society, and it is not at all strange for young mothers to bring children to classes,” Jonathan Kaplan, vice provost of the Rothberg International School at the Hebrew University of Jerusalem, told Yahoo Parenting. “Babies are often brought to weddings or formal occasions; and during school holidays, it is not uncommon to see children running through the halls of office buildings or university departments.”

In solidarity with Engelberg encouraging parents to bring their babies to the classroom, a slew of similar photos of Israeli professors holding babies have also popped up on the social network.

How do you say “Awwwwww look at those little beh-beh numnums” in Hebrew?