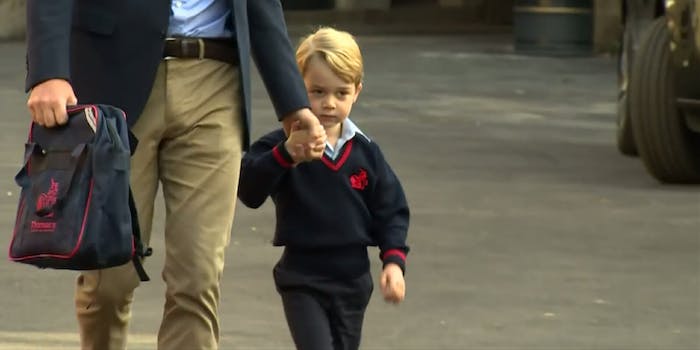 Screengrab via The Royal Family Channel/YouTube

Despite his possibly good intentions, this priest's advice is terribly misguided.

While the Church of England has been taking important strides toward LGBTQ acceptance, like banning “conversion therapy,” many feel the slow and steady progress isn’t enough. But one pro-LGBTQ priest’s ideas may be going a bit too far: He wants Christians to pray for Prince George to become gay.

Over at Rev. Kelvin Holdsworth’s blog, the Scottish Episcopal Church priest laid out a nine-step process by which the Church of England can finally become a bastion for LGBTQ acceptance. Many of his steps are insightful for both queer Christians in the U.K. as well as activists living abroad. For instance, he stresses that the church will only become LGBTQ-friendly once the General Synod, the legislative body of the Church of England, becomes a bulwark for queer rights. He also thinks silent supporters need to become vocal activists, which is a pretty valid point across any institutional structure.

“If people don’t want to engage in campaigning in this way, they do in England have another unique option, which is to pray in the privacy of their hearts (or in public if they dare) for the Lord to bless Prince George with a love, when he grows up, of a fine young gentleman,” Holdsworth wrote. “A royal wedding might sort things out remarkably easily though we might have to wait 25 years for that to happen.”

Prince George, of course, is only 4-years-old. He’s already faced a lot of media scrutiny for his carefree pose while looking at a helicopter, causing many to label his posture and dress as “gay” in a pretty homophobic and transphobic fashion. So once Holdsworth’s suggestion went viral, the responses were critical.

Not to mention, if you can’t “pray the gay away,” then you certainly can’t pray the gay to come in, either. Prince George either is or isn’t attracted to men, period. And quite frankly, that’s something he should figure out on his own without the public encouraging him to start looking for his “fine young gentleman.”

I actually agree with this minister, for once. The Royal Family have NEVER had any OPENLY gay members – though, we all know of a few likelier closet candidates, urged to 'be quiet' by the establishment. It would be refreshing, but George's sexuality is a decision FOR HIM to make!

Prayer that Prince George grows up healthy, happy and falls in love with a person that makes him truly happy would probably be a better idea. If you choose to pray for him at all. https://t.co/9tvkf4LGgi

George should be whatever George is. No prayers needed. Stay out of his life.

Plus, the Church of England has a lot of work to do for marginalized people. One gay prince isn’t going to change everything.

Maybe it’s best to keep Prince George out of any debate for the time being, let alone one about his sexuality, seeing how he’s literally a preschooler.