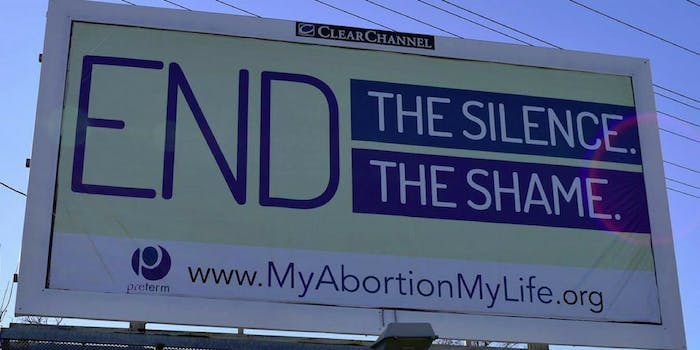 The clinic hopes to erase negative stigmas about the decision to have an abortion.

Stigmas about abortion should be left behind in 2017, and Ohio’s largest nonprofit abortion clinic has launched a campaign to do just that.

“My Abortion, My Life,” a project from abortion clinic Preterm, launched an extensive billboard campaign across greater Cleveland on Jan. 2 challenging negative abortion narratives that often silence women. Through 16 billboards, Preterm’s campaign tells viewers about abortion in a single sentence, beginning with the open-ended phrase, “Abortion is…”

“Abortion is a parenting decision.”

“Abortion is a second chance.”

“Abortion is right for me.”

All of these statements, and the 12 others, challenge toxic misconceptions that abortion is a selfish decision, or is somehow unjustified for the people who make the decision to get an abortion. These ideas often help silence women who have had abortions and prevent them from sharing their experience with other women who could potentially be going through the same thing they once did.

We want each of these great billboards to replace all those lame fake clinic ones! https://t.co/4GCzaWzPqp pic.twitter.com/PdjzMWNYI3

Our new #abortionpositive billboard campaign invites you to reflect on the powerful role that abortion plays in people’s lives. Visit our website to see them all and share your favorites! https://t.co/sSiZim2hen #MyAbortionMyLife #AllOfTheAbove #AbortionIsaBlessing pic.twitter.com/BRIcArhkAk

Our new billboards are going up across #Cleveland today! Learn about the full campaign and check out the map to find the #abortionpositive billboards near you. #MyAbortionMyLife #AllOfTheAbove https://t.co/7mg5vXBkvQ pic.twitter.com/Sywfe1vVLA

“My Abortion, My Life works toward a world without stigma. Our aim is simple. Abortion is a common experience women undergo for many valid personal reasons. If even a fraction of the 50 million American women who have had abortions spoke about the experience, the cycle of silence, shame, and stigma would be broken,” the campaign website reads.

The billboard campaign follows Ohio Republican Gov. John Kasich’s passing of a law that makes abortion based on a Down syndrome diagnosis illegal on Dec. 22.

Below, Preterm has created a map of these billboards, and where to find them: