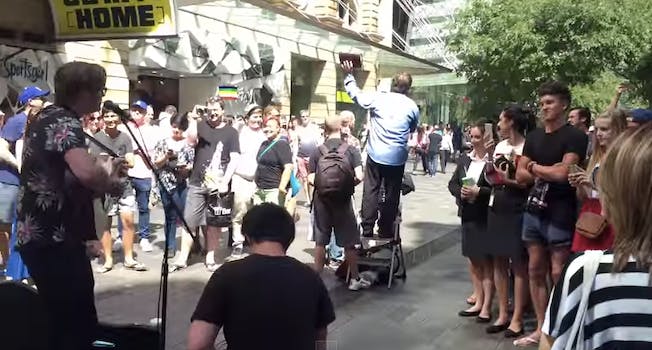 Axel Winter silenced the preacher's hate speech with his most powerful weapon.

Australian street performer Axel Winter was performing on the streets of Sydney during Mardi Gras when a nearby preacher began shouting things like “today, God hates you if you are a homosexual.” Winter decided to fight back with the most powerful weapon he had: his music.

He moved his band closer, and they launched into a spirited rendition of Cyndi Lauper’s classic “Girls Just Wanna Have Fun.” Only instead of “girls” he changed the lyrics to “boys.”

After the performance, he posted a touching message to his Facebook page. “Yesterday, a man tried to yell hateful religiously inspired things about gay people in Pitt Street mall,” he wrote [sic]. “So, myself and the other buskers moved my stuff behind him and drowned out his negativity. The crowd cheered and sang along and soon enough he was gone.
Thank you sydney for taking a stand for equality.
Whether you’re homosexual or transgender or even just confused, you’re still my friend.”