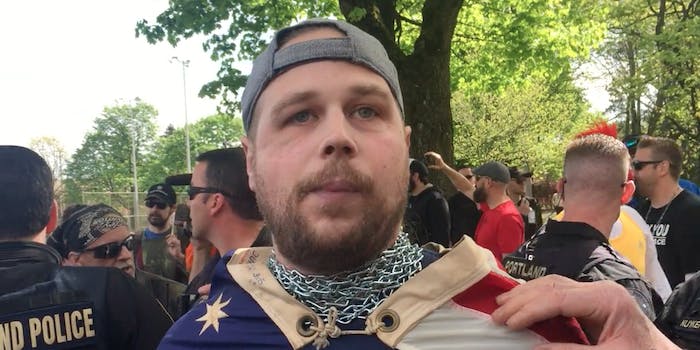 They tried to stop the white supremacist from verbally attacking two women.

Two people are dead and one is injured after allegedly trying to stop a known white supremacist from shouting anti-Muslim hate speech at two young women on a train in Portland, Oregon.

According to local news station KATU and the Oregonian, 35-year-old Jeremy Joseph Christian allegedly attacked the three men with a knife around 4:30pm Friday, the first day of Ramadan, when they attempted to intervene in his verbal assault. Witnesses told Portland police that the man’s rant wasn’t focused solely on anti-Muslim attacks. At least one of the women is believe to be Muslim because she was wearing a hijab.

“This suspect was on the train, he was yelling, ranting, and raving a lot of different things, including what would be characterized as hate speech or biased language,” Portland police spokesperson Sgt. Pete Simpson said during a press conference.

One man died in the train car from slash wounds, and a second died at a local hospital. The third man is being treated for non-life-threatening injuries and is expected to recover, the New York Times reported. Police have yet to identify the victims. The young women weren’t injured, but fled the train station before police arrived.

Christian ran from the train station into a nearby neighborhood, and was later arrested on charges of aggravated murder and attempted murder.

“[Christian] said, ‘Get off the bus, and get out of the country because you don’t pay taxes here,’ [he said he] doesn’t like Muslims, they’re criminals,” Evelin Hernandez, a witness riding in the train car, told KATU.

Another view of the memorial near the Hollywood Max Station on Halsey to remember the stabbing victims. #LiveOnK2 #Portland pic.twitter.com/vD3cbOG3Yn

Memorial outside the MAX station where two men were fatally stabbed last night in #Portland after defending Muslim women from hate speech. pic.twitter.com/jL2jaZoQnK

According to the Southern Poverty Law Center, Christian “holds some racist and other extremist beliefs,” and “calls for a homeland for whites, he has anti-Semitic statements praising Nazis” on his Facebook page, per the Oregonian.

Christian is a known extremist and white supremacist according to the Portland Mercury, who brought a bat to the right-wing March for Free Speech in April, but had it confiscated by police. He was documented yelling racial slurs and “Hail Vinland,” and gave Nazi salutes throughout the march.

Portland’s Mayor Ted Wheeler issued a statement condemning the attack and calling the men heroes for standing up to hate.

My statement on the attack on the Max train Friday. pic.twitter.com/5qfz67zaMz

He was joined by Imtiaz Khan, president of the Islamic Center of Portland, who told Oregon Public Broadcasting that he believes hate speech and harassment toward Muslims have increased since the presidential election.

“We are very sad. Ramadan started just a couple hours ago … We are very sorry for the two men who tried to do the right thing,” Khan told the station. “Of course people from the Muslim community are concerned. And unfortunately the easy targets are women because of the headscarf.”