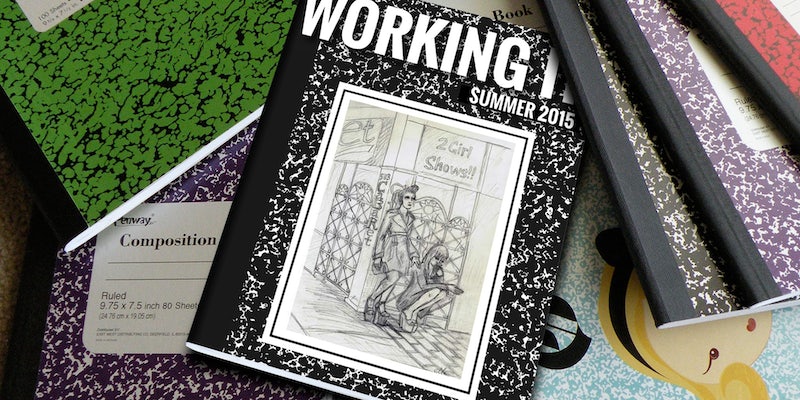 In Portland, sex workers run the show. And now, they’re running a magazine.

The City of Roses is not only famous for having the most strip clubs per capita in the U.S., but it’s also the only American city in which strippers literally make the rules. Last fall, a coalition of dancers from the city’s approximately 100 titty bars worked with lobbyists and social workers to write safety legislation for independent entertainers.

Now, Portland sex workers of all kinds are banding together to publish a magazine. What started out in December as an old-school cut and paste ‘zine called SW News has blossomed into a colorful rag titled Working It—available on Etsy, with a soon-to-launch website offering health, legal, and harm reduction resources to the Northwest sex worker community.

Sitting in the editor’s chair is Portland native Matilda “Red” Bickers, a 30-year-old longtime exotic dancer who made national news last year when she and coworker Amy Pitts brought a lawsuit against their primary place of business, notorious vegan strip club Casa Diablo.

“I’ve been doing different kinds of sex work off and on for the past twelve years,” Bickers told the Daily Dot. She explained that 2014 was a game-changing year, between her lawsuit and working on the legislation effort with the National Association of Social Workers (NASW). “It suddenly felt like the arid and apathetic climate of Portland’s sex industry might be ripe for change.”

Working It is a compendium of all that makes the sex industry so fascinating, inside and out. Each issue features a recurring “worst tip ever” submitted by workers. (If you thought getting a fifty-cent tip as a waitress is bad, trying having a dirt-smudged coupon for a free McDonald’s coffee tossed onto your stage, while a crowd stares deep into your vagina.)

While there’s no shortage of sex worker blogs out there, a zine lends itself to the hours of downtime often available on the job to sex workers: in dressing rooms, dungeons, and brothels, there’s a lot of time to read while waiting for clients to show up.

The jokes are what set it apart—”slut jokes are just whoreable,” reads one comic caption—but the meat of the magazine is a serious focus on law enforcement, legislation, and the stigmas and struggles of everyday working girls.

“Not a lot of people are aware of how terrifying the situation is getting for all of us,” said Bickers. “Full service sex workers (FSSW) are getting the worst of it right now, but the US is not the best place to be a sex worker and it’s going to get worse before we can start to make it better.”

She added: “We need active engagement and education now, and ways for people who love us and support us to get involved.”

The Summer 2015 issue of Working It features detailed advice from a labor lawyer who explains the murky “independent contractor” designation that allows most American strip clubs to charge dancers hundreds of dollars a night in fees and fines just for the right to occupy the stage. Another article delves into background checks, and whether someone’s sex worker status can be revealed through a simple check online.

One essay, written by a social work student named Katya, painfully retells what happened when she came out gleefully to her graduate school program at Lewis & Clark College, only to be shut down in a way that surprised and traumatized her.

“It felt extremely important to me that I be ‘out’ in all ways, and I felt almost desperate to have a space in which I felt fully integrated and safe,” wrote Katya in the Summer 2015 issue of Working It. “Ultimately and essentially, the chair of my department told me that I needed to choose between dancing and being a student in that program. She cited the code of ethics as a source of conflict, and also maintained that the program had to consider whether stripping led to further injustice in the world, and thus whether they could support a student who worked in the industry.”

Bickers said that the typically poor media coverage of the industry was a major motivation to start the magazine, which recently secured a grant to build its upcoming website.

“A responsible media would acknowledge the interconnectedness of economics, poverty, a wretched and abusive foster care system, and the massive pay gap of misogyny which all play into low income or vulnerable people taking part in sex work,” said Bickers. “They wouldn’t be covering a poor kid in the Midwest as a trafficker, they would be looking at the way her family and the courts failed her and how she did what she had to do to survive.”

Portland has long been unique as a city that supports its local sex workers. Local sex industry guide Exotic provides a map to the city’s nearly 200 adult businesses, the majority of which are strip clubs.

The city is also known for the unusual elements of the adult scene that set venues apart in a highly competitive atmosphere. From Mary’s Club, the Northwest’s oldest strip club that’s owned an operated by an all-women family, to the previously mentioned vegan club Casa Diablo, which bans leather and fur on its stage in addition to serving up veggie burgers, to popular destinations like Sassy’s that draw as many female and queer customers as they do drooling males, there’s something different about Portland’s strip clubs.

And it’s not just the pole dancers that provide an alternative: the city is also home to Ron Jeremy’s famous swinger’s joint Club Sesso, to topless fire dancers at rock venue Dante’s, and to a thriving burlesque community.

It makes sense, then, that Portland’s new sex worker’s rights publication would take punk rock zine form, and be sold both on Etsy and at the annual Portland Zine Symposium.

“A tangible product is awesome! You can pass it around, make notes, doodle, rip out and pin up the part you want to remember, leave it for someone else,” Bickers said. “I’m old school. I love zines still.”

Photo via Kristin Nador/Flickr (CC BY 2.0) | Remix by Jason Reed