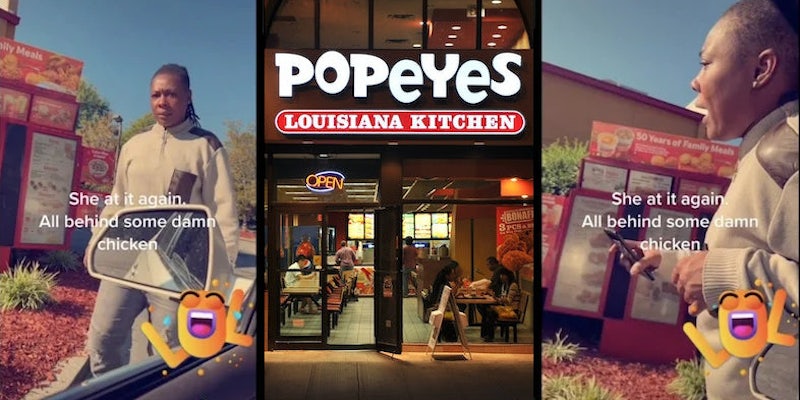 ‘You wanna interview me now?’: Customer gets interviewed for job at Popeyes in the drive-thru after finding out it’s short-staffed

In a viral video, a customer asks for a job at a Popeyes drive-thru window after she’s told the location is “short-staffed” and that she can’t get her chicken for another hour.

TikToker @thoroughbred_84 recorded the incident, in which she and her partner tried to get some chicken at the Popeyess drive-thru. The video received 1.2 million views.

Without missing a beat, the customer asks, “Can I have a job then ’cause I’m hungry?” The TikToker bursts into peals of laughter, but the worker over the mic surprises everyone by simply saying, “Yup!”

“You wanna interview me now?” the customer asks, to which the woman responds: “Yup.”

“Look at this fool,” @thoroughbred_84 says laughing, as she pulls around to get a shot of her companion standing at the Popeyes drive-thru window, presumably already conducting her job interview.

Viewers were equally amused and impressed by by these antics. “She’s having a drive thru interview,” one user remarked. Another applauded the woman’s initiative to ask for a job, saying, “I love this! My response when people complain about wait times is ‘then you apply and help’ and she actually did.. YES! Be a solution!”

But, of course, the main question everyone wanted an answer to was whether or not the customer got the job. “We the people need to know did she get the job?” one user, echoing a thought that was on many people’s minds, asked.

It was a happy ending for the hungry passenger. According to @thoroughbred_84, their partner not just got the job, but the people at the Popeyes drive-thru “gave her free food.” She also reportedly started “the same day she went back.” In a follow-up video, the TikToker films her partner celebrating her new job as she walks from the Popeyes building to the car.

It just goes to show, you never know when an opportunity is going to knock at your door—or drive-thru window.

The Daily Dot reached out to @thoroughbred_84 via TikTok comment.