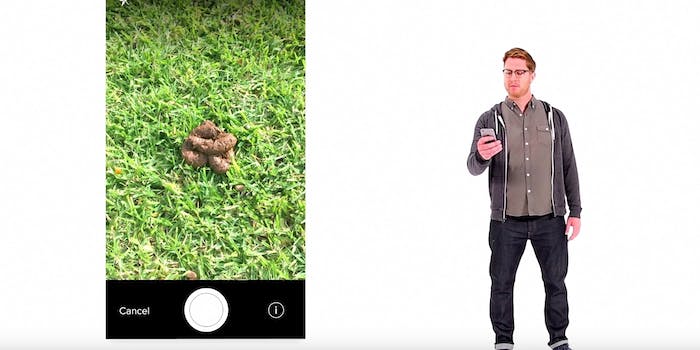 Pooper, an app for the laziest dog owners on earth, is fake

After tricking multiple media outlets, the creators admitted the pooper-scooper app is an art project.

Because the sharing economy has made every aspect of our lives monetizable, of course there is now an app for people who don’t want to pick up their dog’s poop.

Founders of the app called Pooper—whose motto is “your dog’s poop in someone else’s hands”—told multiple media outlets the app was a real thing, but then admitted to Fast Company on Friday that it’s an art project.

“Pooper is in fact a piece of art that is satirizing our app-obsessed world. Specifically, the increasing reliance on the gig-based economy to do stuff for us that we could easily do for ourselves,” founder Ben Becker told Fast Company.

In an extensive interview with the Washington Post last week, Becker said that he’d received a lot of excited inquiries from potential users who would seemingly prefer to photograph poop for someone else to pick up than scoop it up in a bag themselves. (Yes, that means that people were supposed to be paid to drive around picking up poop for other people.)

“The world is getting faster and faster every day,” Becker told the Post. “People’s attention is being pulled in 10 different directions at once… This is just going to expedite things.”

Today co-founder Elliot Glass told Fast Company that they created the promo video and branding to be convincing, but “the fact that people were so willing to embrace that this could be something that could make their lives easier was a little bit terrifying. We had hundreds and hundreds of people sign up for our email lists.”

In the original press release, Glass and Becker claimed they were currently beta-testing Pooper and planned to release it in the fall to markets in San Francisco, Los Angeles, and New York.

“There’s been a mixture of real excitement and skepticism,” the press release read. “But we think the debate over whether the app is real is definitely a net positive for us—not only in terms of building brand recognition, but also in sparking interest for the upcoming release.”

Correction 5:20pm CT, July 29: In the original story yesterday, we stated Pooper was real. The creators of Pooper have since admitted the app is art, not a functional application. We regret the error.