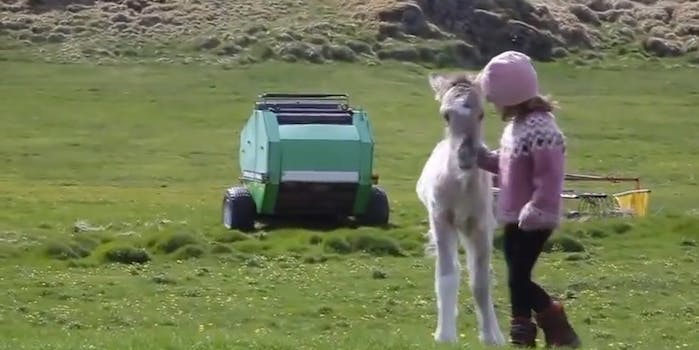 This is why every young girl dreams of having a pony

Watch a young girl and a pony frolic into an unlikely friendship.

There might be something to the idea of actually giving your daughter a pony.

Gigja Einarsdóttir and her family rescued a foal one wandering off on its own night near their home just outside Reykjavik, Iceland. They sheltered the foal, which they named Brogi, for the night and eventually found the mother.

But before they did, Einarsdóttir’s 4-year-old daughter got to run around with Brogi, and it’s the cutest thing ever. The only thing missing from this picture is the rainbow in the background.

The video made it onto YouTube last October, but after being uploaded to the French video-sharing site Dailymotion, it already has been viewed more than twice as many times as the original video.

This girl is essentially living many a childhood dream—even if for just a brief moment.