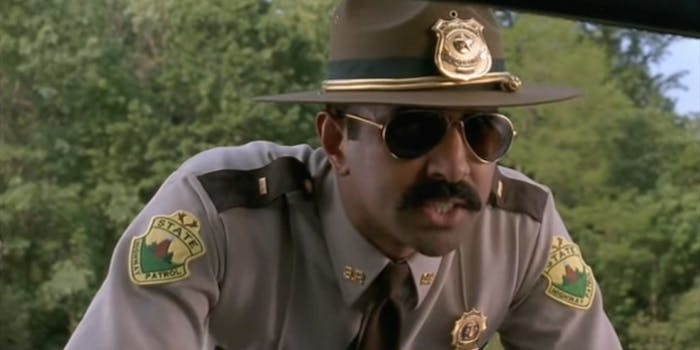 This hardly seems like it should be a priority.

To serve and protect—and to sabotage a popular mapping app.

That’s the latest law enforcement method at work in Miami, Fla., where officers have downloaded the crowdsourced traffic app Waze and weighed it down with false reports of speed traps in order to make the app’s live information less valuable to its users, local news station NBC 6 reports.

Law enforcement’s explanation behind disliking the app is that civilians’ knowing where cops are will put the cops in more danger.

“It puts us at risk, puts the public at risk, because it’s going to cause more deadly force encounters between law enforcement and suspects,” according to Sgt. Javier Ortiz, president of the Miami Fraternal Order of Police.

Waze, which is now owned by Google, relies on the knowledge of its userbase to identify and report traffic characteristics, like jams, accidents, and even speed traps. But the app is unable to distinguish a cop’s fake information from a genuine user report on an individual basis.

However, as Techdirt points out, because of the very nature of crowdsourcing, which harnesses numerous individual reports across a wide population, these vandalistic efforts are in vain. Waze’s system can sniff out the likely duds by noticing individual users reporting speed traps that aren’t reported by anyone else. And the system has something of a trust system built into it—repeated one-off reports means your data probably isn’t very reliable at all.

Furthermore, if everyone thinks there are more speed traps than there actually are, they’re only going to drive more responsibly in these areas and not get tickets.

News of the fake speed traps in Miami follows pressure from Edward Mullins, head of the Sergeants Benevolent Association, who recently wrote a letter to Google demanding the company disable the app’s police-tracking feature.

“In using technology like Waze to publish or disseminate information,” Mullins wrote in the letter, “Google must recognize that the police icon is just a tool that, like any other, can be used for good or bad purposes.”

This echoes the sentiment of the National Sheriffs’ Association, which said last month in a statement that Waze “will hamper [officers’ ability to catch bad drivers] by locating law enforcement officers and puts the public at risk.”