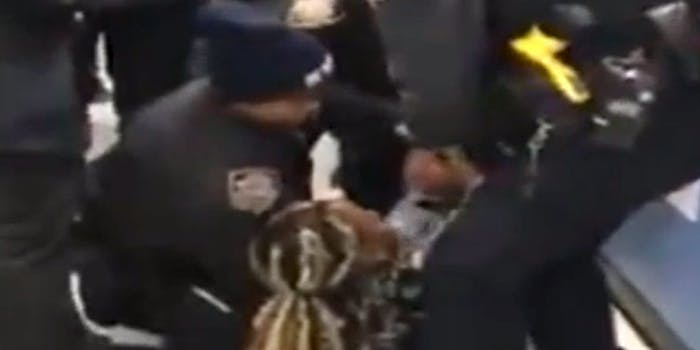 The mother’s crime? Sitting on the ground while waiting for assistance.

The community and local officials are calling for the charges against a New York mother to be dropped after police tore her baby from her arms and arrested her for simply sitting on the floor.

According to local station ABC 7, 23-year-old Jazmine Headley went to the Human Resources administration building in Boerum Hill, Brooklyn, on Friday morning to request daycare vouchers. She came in carrying her one-year-old son, with the goal of using the vouchers to care for him so she could work a cleaning job.

Witnesses say the Human Resources office was very busy that day, and there were no chairs available for Headley to sit in. Rather than spend hours standing and holding her child, she took a seat on the floor.

“She called five other security guards. All harassing her, bothering her,” recounted Ferguson to ABC 7 NY.  “Everyone…was like, ‘Leave the girl alone, she’s not bothering anyone, just sitting there like all day.’ They kept harassing her.”

The video shows Headley laying on her back on the ground desperately trying to keep a hold of her son, while screaming, “They’re grabbing my child!” Multiple police officers violently yank on the infant, at the same time, in different directions. People in the office are crowded around the group of officers, screaming at them to stop. People can be heard yelling, “That’s a baby!” and “Look at what they’re doing to her!” Some bystanders even try to get their bodies between the police and Headley. At one point an officer points a stun gun at the people, and then at the Headley, who is on her back on the ground.

Even though all Headley was trying to do was get care for her son, she is now behind bars. She has been charged with resisting arrest, obstruction, trespass, and, most disturbingly, harming her own child. Brooklyn Borough President Eric Adams says that he will be demanding the NYPD drop all charges against Headley.