When a house is confiscated by the government because one of the people who lives in it sold $40 worth of heroin to an undercover cop, there may be something amiss. Ditto when your car is illegally searched and your money seized without any criminal charges filed.

These asset forfeiture incidents are on a precipitous rise, according to a new report from the Transactional Records Access Clearinghouse, a watchdog that monitors and reports on the activities of the federal government. More specifically, the number of civil lawsuits related to purportedly illegal seizures—many made in non-drug cases—have spiked.

The latest available data from the federal courts show that during October 2014 the government reported 176 new asset forfeiture lawsuits concerning the seizure of property and assets in cases that were not drug-related. These cases had the nature of suit classified by the court system under “Forfeiture/Penalty — Other”. According to the case-by-case information … this number is up 179.4 percent over the previous month when the number of civil filings of this type totaled 63. 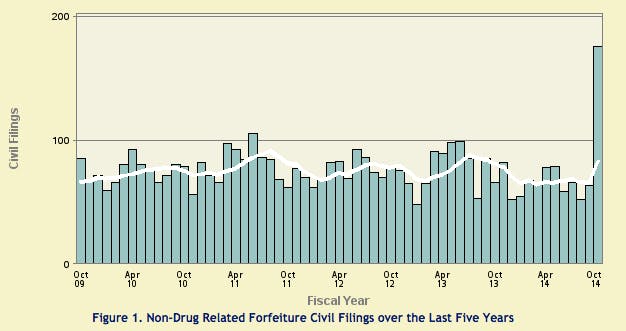 “Nearly two-thirds of these lawsuits were filed in the Eastern District of North Carolina,” the report adds. “North Carolina is the only state in which civil forfeiture is essentially nonexistent in state law, so in many instances local authorities partner with federal agencies to seize property without the more stringent burden of proof that would be required in a criminal case.”

Between this and police trying to delete video evidence of their brutality from bystanders’ phones, it really seems like law enforcement across the country could use a refresher on the U.S. Constitution—or at least a stern talking-to from the ACLU.

Photo by Matthew Fern/Flickr (CC BY 2.0)