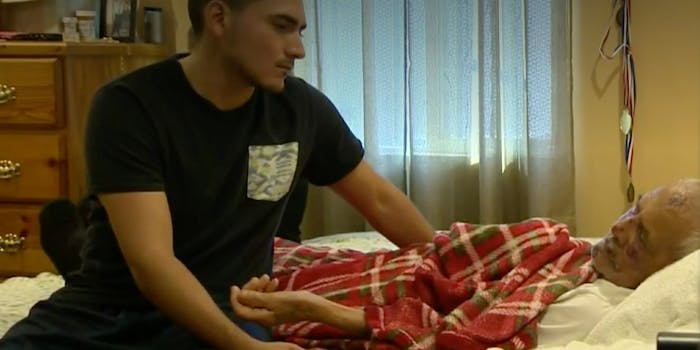 He was reportedly beat after unintentionally bumping into a toddler.

Los Angeles police are searching for the suspects who brutally beat a 92-year-old man and told him to “go back to your country,” the Hill reports.

The man, Rodolfo Rodriguez, is a legal U.S. citizen and was reportedly out for his daily walk when he unintentionally bumped into a toddler, according to the Sacramento Bee. A woman believed to be the child’s mother then shoved him to the ground and began beating his face with a brick.

“Go back to your country, why are you here, bad things,” a witness told a local CBS affiliate the woman said. She was joined by four men who began kicking Rodriguez.

His grandson, Erik Mendoza, said his grandfather can’t speak English and doesn’t know why he was attacked. He was left with broken ribs and a broken cheek bone.

“I’m just overwhelmed how anybody can do this to a human being at all,” Mendoza said. “He’s 92 years of age. There’s no harm that he meant for you to treat him the way you did.”

A GoFundMe for Rodriguez has more than doubled its $15,000 goal to help with medical costs.

Update 8:51pm CT, July 11: A Los Angeles woman has been arrested in relation to the attack on Rodolfo Rodriguez, BuzzFeed News reports. Laquisha Jones, 30, has been charged with assault with a deadly weapon. Her bail is set at $200,000.

“Investigators are still determining if there are more suspects involved. The investigation is ongoing,” the Los Angeles County Sheriff’s Department said in a press release.