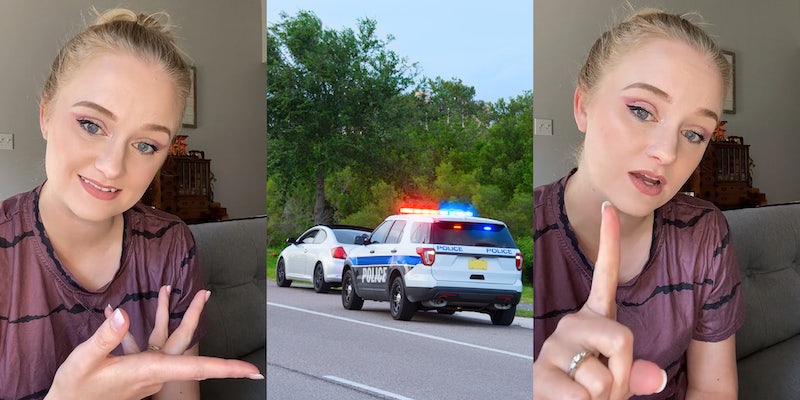 ‘If they find you physically attractive… they will issue you a ticket’: Former 911 dispatcher claims police have ‘pretty girl Wednesdays’ (updated)

'If people really knew what went on in police depts, they would be shocked!'

A former 911 dispatcher is giving an inside look into some distasteful practices they witnessed while on the job interacting with police.

In a video posted to TikTok, user @notthegatekeeper divulged with viewers that while working in Oklahoma, they learned that some police officers allegedly take part in what they call “pretty girl Wednesdays.” @notthegatekeeper says police would essentially do back-to-back traffic stops on Wednesdays, and if they found the driver, usually a woman, physically attractive they would issue a ticket.

“Vile, yes. But not even the tip of the iceberg,” @notthegatekeeper states.

“If people really knew what [went] on in police [departments], they would be shocked!” one commenter wrote.

Some commenters asked @notthegatekeeper whether or not police officers have ticket quotas. The creator responded, “‘quota’ used to be a prevalent thing, but it’s transitioning out except with State Police/Troopers.”

One commenter, @thehairofslytherin claimed they dated a cop and learned police would play a game where they guess the ethnicity of a person who committed a crime.

“Oh yes this was definitely a thing,” @notthegatekeeper replied.

In a separate video, @notthegatekeeper also shares their experience as a reserve sheriff’s deputy, which is “basically a volunteer cop,” they say. While out on traffic stops with a police officer, they say they witnessed an officer refuse to stop a car that was going 90 mph when the limit was 75 mph because of the type of car that was being driven.

“He goes, ‘Oh no, no, no, no we’re waiting on a hooptie because we don’t want to bother people driving nice cars,”  @notthegatekeeper recalls.

“Tickets are classist. I said what I said,” one commenter said.

Others also called on @notthegatekeeper to continue giving a behind-the-scenes look at police conduct through her videos.

“More of this please!” one wrote.

Update 12:19pm CT, Sept. 28: When reached for comment, 33-year-old Kylie (@notthegatekeeper) told the Daily Dot she created her account to provide transparency when it comes to “the services that 911 provides to the public.”

“With that transparency comes the good, the bad, and the ugly,” she said. “Today’s society demands better from public safety and emergency response officials, so providing that transparency shows those in this field that there are people willing to talk. My hope and intention is that other public safety officials may see this and be provided with pause and reflection on their actions and their own intentions when they serve the public.”

Kylie said there’s a few things she wants people to take away from her video and account.

“There are individuals in this line of work who sees them and hears them. I want people to know that there are people like me who are trying to make this field better for the people it is supposed to serve,” she said.

She said her personal experience as a 911 operator has been “mostly positive.”

“There are good days and bad days like in every profession,” she said. “This job does take a toll on your mental health over time and I can positively affirm that this job is not for everyone.”

Her tip to people wanting to become a 911 operator is to not take things callers say personally.

“You have to understand that no one calls you when they’re having a good day. They are scared, stressed, frustrated, angry – all the negative feelings,” she said. “People project those feelings during intense situations and you have to remind yourself that it isn’t about you, you can’t take it personally, and that these people probably don’t even know what they’re saying to you.”