She lost her dad in a car crash. He tried to cheer her up the only way he knew how.

After a deadly car crash, a police officer was photographed comforting a child at the scene.

Brighton Police officer Nick Struck was the third to arrive at the scene of a vehicle rollover in Brighton, Colorado. All six passengers in the SUV were ejected, leaving one man dead.

A first responder handed Struck the 2-year-old daughter of the man who died in the crash. The officer started singing “Twinkle, Twinkle, Little Star” to comfort the young girl, something he does to calm down his own 2-year-old daughter when she gets hurt. 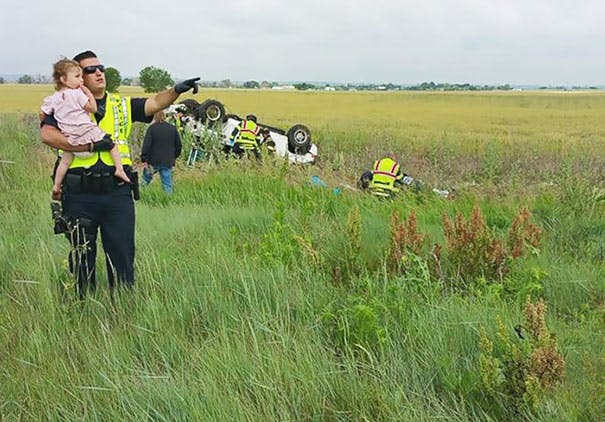 “So then the role we do is, to keep them safe, what would I want that dad to do if it was my daughter,” Struck told USA Today.

Jessica Matrious, who was behind the wheel when the car crashed, immediately pulled over and called for help. She’s also the woman who snapped the photos of the crash and Struck holding the 2-year-old in his arms.

“I have a 2-year-old daughter, and she’s my first kid. So of course, your first thought is that could be your little daughter,” Struck said.

The photo has since gone viral, getting more than 3 million views on Imgur.